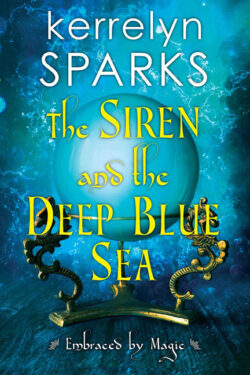 The conclusion of the Embraced by Magic series comes to a satisfying ending with Kerrelyn Sparks’ THE SIREN AND THE DEEP BLUE SEA. This book should be read after first reading the previous four in the series for best enjoyment. Though the lead characters have a standalone romance, the book is an obvious continuation of an over-arcing plot.

Maeve, the youngest of five sisters, is one of the Embraced–a person with magical power. She’s watched her sisters find love and happiness with the four kings of Aerthlan while a dark magical group with sinister plans continues to work against them. The man she’s been secretly adoring, Brody, has been instrumental in getting the rulers of Aerthlan intelligence. But now he’s missing, and no one but Maeve seems concerned.

Brody is cursed to spend only two hours a day in his normal shape, the rest of his time as another creature (any one of dozens he can shapeshift into), whether it be a dog, a bird, or even another person. Though he has feelings for Maeve, he’s never shared them. Because what could he have to offer her?

But when Maeve finds a way to get more information to help their cause, she puts herself in danger. Brody’s plans to end the threat must change when he finds Maeve in the clutches of the enemy. Add in an Embraced army, royals converging for a final battle, and Maeve learning the truth about her past, and the adventures keep coming.

The story flows well, and the author has a terrific ability to pull the reader into the story. But the romance takes second fiddle to rushing to the end, and Brody and Maeve’s relationship seems almost like an afterthought to the journey to defeat the bad guys. There is almost more time spent on Brody’s sister and friend developing their happily ever after than on Maeve and Brody.

All in all, a fun, likeable fantasy romance light on romance and heavy on plot. Easy to read with characters to root for, and a must-read for fans of the series.