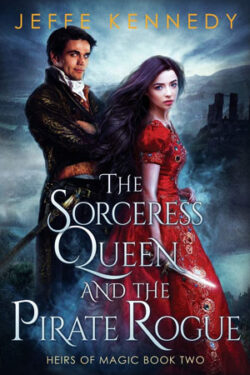 Jakral “Jak” Konyngrr is the only child of a Dasnarian prince-turned-sailor and a former Hawk – a royal elite guard and hunter. He has always loved Stella, but the woman-in-question treats him like a meddlesome brother. Jak accompanies his friends on a quest to investigate strange and odd magical rifts. He risks everything to protect Stella from the otherworldly being stalking her. Can Jak convince Stella to take a chance with him? Can he carve a future with her? Or will he lose her to the metaphysical entity?

Princess Stella is the daughter of Princess Amelia and the late Prince of Avonlidgh and Astar’s twin sister. She is also an empath, a healer, a shape-shifter, and a sorceress. Stella must keep everyone at a distance because of her sensitivity to touch. She knows what her future holds, and Jak has no place in it, so she tries to discourage his interest. When Stella attracts a supernatural being’s notice, she trusts Jak to protect her. Can Stella escape her bleak future? But at what cost?

Jak has to be my favorite hero from all of Jeffe Kennedy’s books. He is the perfect melding of his parents, who will always be my favorite couple. I absolutely love Jak’s rascally personality. His devil-may-care attitude is a front to hide a keen mind and strong strength-of-will. He may not have magic or shape-shifting abilities like his friends, but that does not hinder him. What I adore the most about Jak is his thoughtfulness towards Stella’s empathic sensitivities. He is considerate to her needs without making her feel like a fragile invalid.

Usually, I dislike heroines like Stella. However, she endeared herself to me. Stella has been gifted with incredible powers; however, those powers come with a debilitating handicap, one that has dominated her life. I like how Stella looks after her friends’ welfare and mental state. If she can help her friends in any way, she does it without any regard to her health. What I love the most about Stella is how she never thought less of Jak for not having magic or being a shapeshifter. She acknowledged his skills and keen mind, which proved to be an asset to their party.

THE SORCERESS QUEEN AND THE PIRATE ROGUE is book two in Jeffe Kennedy’s fantasy-romance series, HEIRS OF MAGIC, a spinoff from her series, THE TWELVE KINGDOMS and THE UNCHARTED REALMS. It is necessary to read the prior book and novella to understand the world’s current situation. Also, I highly recommend reading the previous two series to understand the world, how its magic works, and the characters’ background, which plays an important role in the story.

THE SORCERESS QUEEN AND THE PIRATE ROGUE is a spellbinding tale of two soulmates facing incredible odds to find a way to be together. I am so happy that Gen’s book is next! She deserves to find her special someone. I cannot wait!