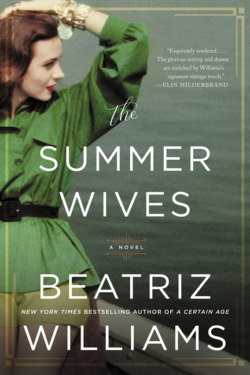 THE SUMMER WIVES is the second book I’ve read by Beatriz Williams. Her books are richly written women’s fiction, historical in nature, and they immerse you in a different era. This book takes place on the elite Winthrop Island, set in New England, where the rich live in the summer but Portuguese fishermen and their hardworking families live year round. It’s the haves vs. the have-nots, and we are exposed to how both halves live and see what happens when their paths ultimately cross.

The story opens in 1969 but goes back and forth between then and the 1930’s and 1950’s. It’s told from Miranda and Bianca’s point of view. Miranda and Isobel become stepsisters when Miranda’s mom marries Isobel’s dad. They have a strange relationship that’s often strained, and each keeps secrets from the other. There are a lot of secondary characters who are enmeshed in the story, and it wouldn’t be as rich without them. The sea, fishing for lobster, and the lighthouse are thoroughly interwoven throughout the story.

There are many secrets and a lot of twists and turns to the story. Some of the circumstances are subtle but tie in nicely to the plot later on. The vivid description of the island and the authenticity of its people made me feel like I was there. There are a few romances throughout—some more meaningful than others.

This was enjoyable read for me since it’s so close to my home. The characters had a realism to them, and I could see their summer antics being no big deal. What happens on the island stays on the island! I was engaged from the first page to the last, and the chapters flew by as I was engrossed in the multiple story lines that all came together in the end for a stunning conclusion.

Williams is a new to me author only having read A CERTAIN AGE previously. Next up for me is COCOA BEACH, set in the 1920’s in New York and Florida.