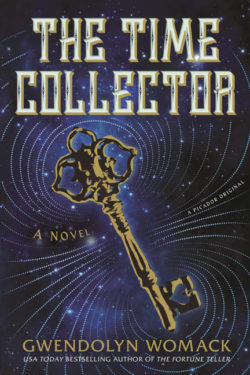 THE TIME COLLECTOR is a unique time travel in that the characters only travel in their minds after touching an object from the past. Roan West, the hero, is a psychometrist who has highly developed skills along with a small number of other psychometrists around the world.

Melicent Tilpin, the heroine, recently discovered her powers as a psychometrist, and when Roan sees a YouTube of her talking about her ability, he goes to see her, touches the snow globe she made, and learns about her struggles to raise her teenage brother after her mother dies of cancer. He’s taken with her and falling in love from their first meet.

Someone is killing psychometrists, and they set Melicent’s house on fire in Los Angeles. She and her brother narrowly escape with their lives. Roan takes them to stay with him in New Orleans while he searches for the person after the psychometrists and solve the mystery of the ooparts—out-of-place artifacts.

THE TIME COLLECTOR kept me reading, but there were places where I felt like there was unnecessary detail that could have been cut and made it much more of a page turner. Even so, it was a different and clever approach to time travel with a dash of romance.