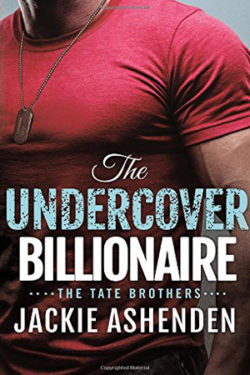 THE UNDERCOVER BILLIONAIRE is a romantic suspense and has lots of action.  Take two warring, power-hungry families who don’t always play by the rules–the Tate and the de Santis families–and all hell breaks loose.

Wolf Tate and Olivia de Santis have been friends for ten years. They have a definite chemistry, but she’s young, unlike Wolf, who is a Navy SEAL. When sparks fly, someone is bound to get burned.

Wolf is trying to fulfill his dead father’s last wishes, but there are all sorts of lies to uncover. When he and Olivia get tangled up, not once but twice, things take an interesting turn.

Not having read the first two books in the series, I was definitely at a disadvantage, since a lot of events that have happened previously are alluded to but not spelled out.  Things did get confusing at times, but then I’d get a hint of something and could run with it. The story has a lot of violence, intrigue, and daring along with too much honesty at times. And of course, lots of hot, steamy, between-the-sheets moments.

The story is sometimes choppy and in some spots seems far-fetched. There is some closure with the epilogue, but could use more. It definitely left me wanting to know what happens next, although there seems likely to be a few happily ever afters.

Ashenden is a new-to-me author, and I will give a few of her other books a try, especially the first two books in the TATE BROTHERS series, THE DANGEROUS BILLIONAIRE and THE WICKED BILLIONAIRE, respectively.