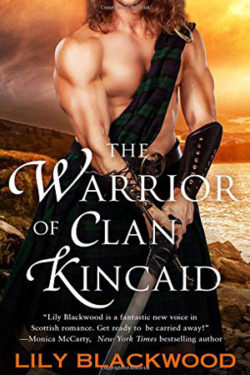 In THE WARRIOR OF CLAN KINCAID, author Lily Blackwood takes the reader on a fascinating journey.

Derryth MacClaren must leave the safety of her sister, Elspeth, and her husband’s—Niall, Laird Kincaid—castle for home. She hates leaving Elspeth, who is pregnant. Niall insists Derryth travel incognito to her father’s home, as there is a threat of siege from Niall’s enemy. The vicious nobleman known as the Wolf has vowed to kill the leader of clan Kincaid and conquer his lands.

Derryth and a small escort of her brother-in-law’s men are dressed as peasants, in hopes of not being bothered by the approaching arm. The small band of refuges travels directly into the path of the enemy. They are captured within a few hours. Cull the Nameless, an orphaned slave who only new his first name, thus he is called “The Nameless,” is a leader in Wolf’s army, comes upon a group of paid mercenaries as they begin to attack Derryth. She is on the ground and covered in mud. Cull thinks she is but a child.

He announces that the prisoners will work in the camp until he figures out if they really are peasants or if they are from the enemy’s castle. He takes Derryth to his tent so she can help his aging butler. And it is his hope to keep her safe from the men in the camp, especially after she bathes and he can see she is a bonny lass.

Cull the Nameless, as a young boy, was kidnapped and sold as a slave to a Venetian ship captain. He is loyal to the Earl of Buchan, the Wolf, since Wolf bought the lad’s freedom and trained him to be a soldier. Eventually Cull became a King’s Guard. He has no hatred for the Kincaids, whom they are attacking, but he is given to following orders. If he helps defeat the Highlanders, he has been promised land and much wealth for capturing Laird Kincaid’s castle. He would be given a last name. Cull has always dreamed of having a surname, land, and a family of his own. He has no recollection of his family or where he is from.

Derryth is at first afraid of the giant warrior but soon falls for his politeness and his gentleness, and her heart is seduced.

Their love story is a slow burn. But the pages do get steamy! When she finally confesses to Cull that she is not a peasant but a lady and that her sister is married to Laird Kincaid, Cull has to figure out what to do. His heart is Derryth’s, but his sword is Wolf’s. What does he have to do to keep Derryth safe and with him forever and fulfill his duty?

There are several great plot twists, and with Derryth’s help in the end, Cull knows exactly where he belongs and meets his family. I really enjoyed this book!