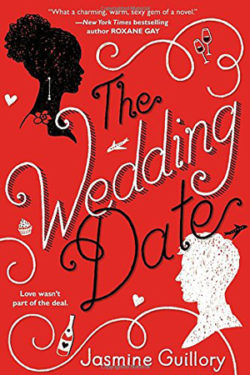 THE WEDDING DATE is Jasmine Guillory’s debut novel, and it was playful and full of love, friendship, and angst. Imagine someone you get stuck in an elevator with invites you to be their date for a wedding he’s dreading attending and you surprisingly say yes, despite just having met them in said elevator. That’s the premise of this book, and it kept my interest from start to finish. I kept turning the pages to see what would happen next.

Alexa and Drew should have nothing in common, but they have immediate chemistry that throws them both off their game. He’s a doctor in the Los Angeles area. She’s the chief of staff for the mayor of Berkeley, outside of San Francisco. He’s white. She’s black. He’s fit. She’s voluptuous. They love some of the same things, are great together in bed and out, and they understand each other like no others they’ve dated before. But they don’t live near each other, and long distance relationships rarely work.

There were laugh-out-loud moments along with tears and lots of food—and donuts. Conflicts arose due to job-related stresses, which caused arguments. But those apologies promised romance and lots of between-the-sheets loving and affection.

Drew seems to sabotage relationships before they really go anywhere, and Alexa doesn’t know how to act around the opposite sex unless it’s job-related. As they flew back and forth between the cities, the author added vivid descriptions of settings that enriched the story. The characters were shallow at times, but at other times had a depth to them as well as insights into each other. There was some closure, especially with the epilogue, though I wish it would have gone a little further…unless we’re going to meet up with these characters again (hint, hint). There seem to be more stories needing to be told, since their friends all need romance.

If this is the caliber of Guillory’s writing, I will be back for more. I did think the bad language could be toned down, since in my opinion it didn’t really add to the story. Surprisingly, the amount of sex fit perfectly in learning about Alexa and Drew’s relationship.