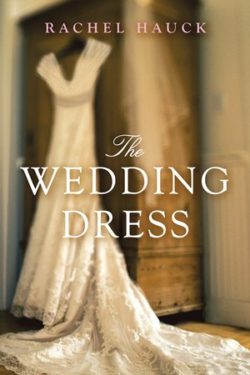 THE WEDDING DRESS was not at all what I expected.  The book switches between the past and the present – Emily’s story in 1912 and Charlotte’s in 2012.  When Charlotte unexpectedly buys an old trunk at an auction that is welded shut she’s not aware of the ramifications it will have on her life.  When it’s finally opened with the help of Charlotte’s ex-fiance, Tim, things really start to get interesting as she tries to learn the history of the hundred year old wedding dress that is still in perfect condition.

The book takes place in Alabama and Emily is before her time fighting for the right for women to vote and also having business dealings with the colored people.  She is engaged to be married to Phillip Saltonstall whose family has a position in society but she continuously has her doubts whether they’re right for each other as well as whether they really love each other.  Phillip doesn’t like many of Emily’s actions and she’s not enamored of all of his as well especially since she’s caught him in a few lies. She’s not sure she even trusts him.  Her old boyfriend, Daniel, returns for her after giving up playing baseball and is devastated that she’s moved on with her life and left him and his love behind.  Who does she end up marrying and what does the dress she wears look like especially since the dress in the trunk was designed and made by a colored woman?

Charlotte and her fiance break up after realizing they were both dragging their feet about planning the wedding.  They met and were engaged within two months and then things started to peter off.  Watching Charlotte in her bridal shop, trying to solve the mystery of the dress and interacting with her friends kept me interested from the first page to the last. One of the wearer’s of the dress, Hillary, becomes an integral part of the story and shed light on other owners.  Tim surprisingly does his share of helping Charlotte with the history and their relationship changes or does it?

There were multidimensional characters and many twists and turns to the story.  There were family and friends, heartache, lies, a mysterious man, injuries, anger, hurt, fear, tears, disillusionment, happiness, laughter, trust, support. loving and love.  There was nice closure and an unexpected happily ever after.  I look forward to reading Hauck’s next book, THE WEDDING SHOP.

Hauck is a new to me author and I will be adding her books to my always growing TBR pile if this is her caliber of writing.