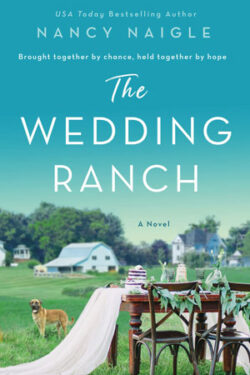 THE WEDDING RANCH is a second-chance romance for Lorri and Ryder, neither of whom believes it’s in their cards for a future together. She’s divorced after giving her ex-husband more chances than he deserved. He’s a widower who tragically lost his wife and son in an accident with a drunk driver. Their unexpected meeting is filled with romance, attraction, and more.

Ryder has become a loner since the loss of his family. He’s surrounded by extend family—his sister, niece and nephew, and at times his traveling parents. Lorri is angry with her brother (who died) and her parents and surrounds herself with friends. Yet “her” friends are actually her ex’s friends as well.

Lorri’s dog, Mister, a gift from her ex-husband before they divorced, is a wonderful addition to the story, as are Ryder’s horses. There are romantic gestures galore from Ryder, each one better than the other. I loved that we get to know them a little at a time and see how much better they are together especially when they learn to communicate. There is closure with the epilogue that has so much packed into it as well as hints of another romance that’s brewing.

For an emotional romance that’s jam-packed with good feeling, read THE WEDDING RANCH. You won’t be disappointed!