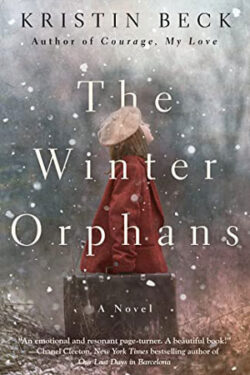 THE WINTER ORPHANS is an emotional, historical novel set during World War II in both France and Switzerland. Based on a true story, it tells of children who left their parents in Nazi Germany and lived in children’s homes run by volunteers of the Swiss Red Cross.  The story is told in three parts from different characters’ points of view.

Rosli was in charge of the children’s home, La Hille, in a remote part of France and fought fiercely for “her” children. Ann-Marie Piquet succeeded Rosli when Rosli was forced out by the Red Cross. The women held similar beliefs and worked hard while caring for and protecting the children under their charge, along with the help from a few men who worked with them and some on the outside who secretly supported their cause. Others also helped when they could, and the children themselves had such strength. Ella, a teen who lived in La Hille along with her younger sister, Hanni, also tells her story.

This is an emotional read. I often had tears streaming down my face. I could feel the cold, the children’s fear, their hunger and despair. But there’s a resiliency to them. They refuse to let their dreams be snuffed out, especially not knowing where their parents are, or if they’re even still alive.

THE WINTER ORPHANS is hard to put down. It immerses the reader in the story from the first page to the last. The author does a beautiful job of using her words to create images that resonate. I appreciated the gamut of emotions and very much enjoyed the epilogue, which takes place ten years later in Denmark. The Author’s Note at the end shows the research that went into the writing of this book and quantifies how much of what is portrayed really happened. If I could give THE WINTER ORPHANS more than 5 stars, I would! This book totally deserves it.