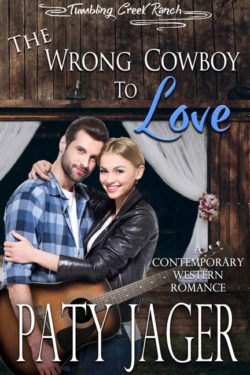 THE WRONG COWBOY TO LOVE is a continuation of the TUMBLING CREEK RANCH series, and I was happy to be back with characters I’ve met before. Ruby and Dillon have sparks the minute they meet and connect on so many levels, even though they don’t seem to have much in common. She’s a tech whiz who’s always invisible and seems to like it that way, except no one ever sees her or compliments her. He’s a singer/songwriter trying to get his songs out there and always on stage when he has gigs. They’re both all-in, but some think they’re moving too fast.

Ruby’s family was hard to like and spit venom whenever they spoke. The lands surrounding the ranch and the cabins were breathtaking in the descriptions used. The story had a nice flow and had the closure I look for. It gave me the happily ever after I wanted after a few unexpected twists and turns and with some hard-to-like people!

THE WRONG COWBOY TO LOVE was originally published in the DO YOU TAKE THIS COWBOY? boxed set and is now a stand alone book. Ms. Jager has become one of my favorite authors of historical romances set in the west. I’ve read several of her full-length novels as well as several stories that have been part of anthologies with all things cowboy! I look forward to reading more of her books, and I’m hoping there will be more in this series.