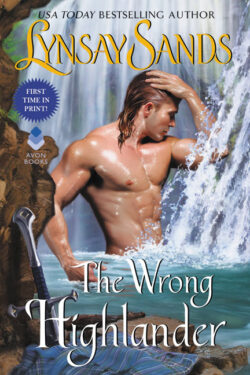 THE WRONG HIGHLANDER by Lynsay Sands is a fun, rollicking, and sizzling hot Highland Romance.

Lady Evina Maclean has been running Maclean Keep since the death of her mother at age ten. She knows how to use a sword, spars with the men of the castle, and often wears braises, pants. Her father becomes desperately ill, and Evina sets off with two of her men to steal a healer.

She is after Rory Buchanan, a healer whose reputation is stellar. She finds him bathing under a waterfall. There isn’t time to chat, and she sends her cousin Gavin into the water to get him. There is a fight and Evina rides her horse into the water and clunks Rory over the head with the hilt of her sword and takes him home. The only problem, she kidnapped the wrong brother! Instead, she has kidnapped Conran Buchanan.

Mistaken identity, definite chemistry between the hero and heroine, funny secondary characters, and danger, which comes in the form of someone stalking Evina, make this a steamy, light comedy, drama, and just an all-around good book.

I highly recommend THE WRONG HIGHLANDER.