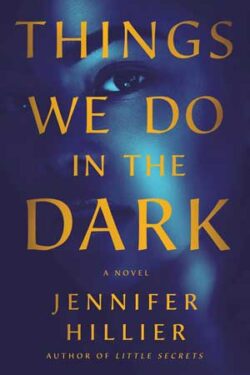 Jennifer Hillier writes psychological thrillers like no one else, and her latest novel, THINGS WE DO IN THE DARK, is exceptional! When Paris Peralta is accused of murdering her celebrity husband, a well of secrets and lies come to light as the surprise killer is slowly revealed.

The character development in THINGS WE DO IN THE DARK is so perfectly unveiled, with flashbacks to the past revealed slowly but not too slowly that they affect the quick pacing of this diabolically twisted story. There’s murder, blackmail, suspicion, and more murder. But who has done it and why?

Paris’s upbringing has its own issues, but the love she had for her now deceased husband feels real, and the complex relationships in the story build for a big reveal at the end that is both surprising, sad, yet satisfying.

With ties to a past love, Paris’s mother being a convicted criminal, and Paris’s attempt to live a normal life, the story spirals until it settles, then spirals again, keeping the reader in a state of suspense that demands you keep reading until the very end.

I can’t suggest this book highly enough! For a fantastic psychological thriller that keeps you guessing as well as reading far into the night, pick up THING WE DO IN THE DARK.