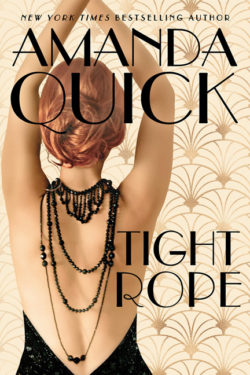 In TIGHTROPE, the next edition of Amanda Quick’s Burning Cove, California series set just after the Great Depression, trapeze artist Amalie Vaughn has a startling brush with death and is starting over by taking on the running of an inn—one apparently cursed as the previous owner, a famous psychic, died there.

So begins a fast-paced but uneven new romantic suspense by the always entertaining Amanda Quick. There’s the insertion of a Jones, from Quick’s popular Jones family (psychics in many of her previous romances.) This book completely stands alone, however, so readers will not be confused.

As I’ve said, the book is fast-paced, but the plot is a bit convoluted, or I’m just slow, but I had to reread pages and kept putting the book down, when typically I read an Amanda Quick (a.k.a. Jayne Ann Krentz) novel from start to finish in one sitting. The first few chapters go from one point of view to another, and not just between the hero and heroine, but with several secondary characters that, though important to the story, just kept me distanced from the protagonists a bit too much.

I think the main problem I had with the book centered on the tepid romance between the leads. Amalie is a strong, almost abrasive character from the get-go. With good reason, but it took me a while to warm to her. And the hero, Matthias Jones, was overshadowed by her and just kind of…there…as a suspenseful addition to the cast. It took a good third to half of the book before their romance got started. And then it was almost an afterthought, taking a back seat to the intricate mystery.

Not to go into too much detail, but the plot involves a robot, government agencies, the mob, assassins, a serial killer/s, Hollywood stars, secrets and spies, and oh yes, a touch of romance.

This was a miss for me, but being an Amanda Quick fan, I had to read it and will no doubt pick up her next book without question. For a mystery with a touch of romance, this is a fun, entertaining read. But I don’t think it’s one of Amanda Quick’s best.