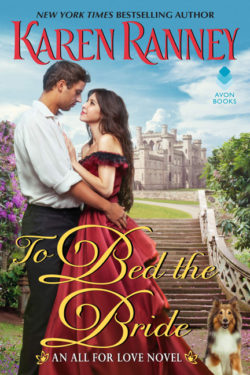 TO BED THE BRIDE by Karen Ranney is the third book in the series AN ALL FOR LOVE NOVEL. This book takes place in 1868 in both Heathmere, Scotland and London.

The heroine, Eleanor Craig, inherits Heathmere estates when she is only eleven years old. Her uncle and aunt oversee her inherited estates, which she will get when she reaches her majority. When her uncle dies, Eleanor’s aunt moves the family to London. Eleanor is allowed to return Heathmere, Scotland for a month each year. The aunt, who has continually mistreated Eleanor, remarries. Eleanor is introduced to society and the family is thrilled when she becomes engaged to the Earl of Westcott–an engagement she was basically forced into.

Eleanor’s fiancé dislikes all things Scottish, and he’s told the aunt that he will sell Eleanor’s estate once they are married.

Eleanor goes to Scotland  by herself for one last time before her marriage. While she is out riding on a country lane, she meets a shepherd, who ends up giving her a puppy. The shepherd, Logan McKnight, invites her to his cottage for tea. She learns he is not a shepherd and is in fact on holiday, soon to go back to London. He gives her a kiss on the cheek and gives her his address to write and keep him informed on the puppy.

Logan is a very likable character. He sees the Eleanor that appeared to him in Scotland but hides in London. He tries to help Eleanor get a backbone where her family is concerned. He is handsome and funny and a Scotsman, what’s not to like?

When Eleanor returns to London, she begins to doubt her match with the earl. Especially when she runs into Logan again. Logan’s political leanings clash with her family’s, as well as the earl’s. And from there a wonderful relationship, centered around their walks with the puppy, flourishes. But not everyone approves, and there are dangerous consequences for Eleanor as a result.

The Eleanor that falls in love with Logan is a vivacious, caring woman. I had to root for these two to get their HEA. The plot is so well crafted it seemed like there was no way for the HEA to happen.

I enjoyed this story.The plot worked well and the characters were well-devloped. My only problem with it is that it took so long for Eleanor to finally stand up for herself to her obnoxious family. An engaging read!