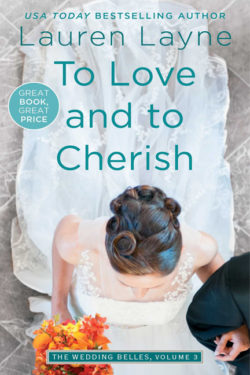 I enjoyed TO LOVE AND TO CHERISH, the last book in the WEDDING BELLES SERIES, and am sorry we won’t be returning to get updates to the characters or the new business venture Logan is involved in along with Josh. This is the story of Alexis and Logan, and the prologue from eight years before set the stage and was a great segue to the story. While the epilogue gave us a hint of the happily ever after, there wasn’t enough closure and still several loose ends that needed to be tied up.

Having read the other books in the series, FROM THIS DAY FORWARD and TO HAVE AND TO HOLD, I knew I’d be excited to be back with the Belles, Logan, and the significant others of the other women. It was nice to see sisters, Roxie and Alexis, try to mend fences after ten years of a strained relationship. I was surprised that Alexis could hold it together so well at the wedding between her sister and her ex-boyfriend from ten years before. Once again, Logan stepped up to the plate to keep Alexis calm and focused, which he seemed to do a lot of. I haven’t read the second book in the series, FOR BETTER OR WORSE, but it is on my always growing TBR pile along with some of Layne’s other books.

There was a lot of sexual tension between Alexis and Logan, and they had the perfect friendship until the kiss mucked it up…or did it? Alexis and Logan had a great business relationship, but could having a personal one as well take their relationship and friendship to a whole new level? There were family and friends throughout, adding family dynamics to this love story filled with tears, hurt, happiness and laughter.There were a few twists to the story, and the characters had a lot of depth to them, especially when neither Logan or Alexis would let their feelings show. There were a few burn-up-the-sheet moments and lots of frustration in between.

A nice read, reminiscent of books by Nora Robert and THE BRIDE QUARTET SERIES, as well as books by Susan Mallery, Jill Shalvis and Debbie Macomber, where friendships are important along with the relationships with their families that need to be worked through, TO LOVE AND TO CHERISH was pure entertainment.