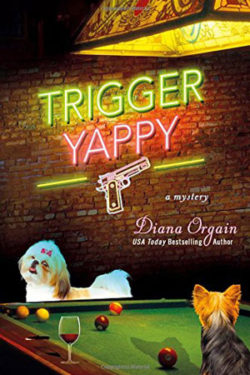 TRIGGER YAPPY by Diana Orgain is a delightful new cozy mystery starring romping puppies, an amateur gumshoe, beautiful Maggie Patterson, and a twisty mystery that will guarantee sleepless nights. Maggie, sleuth extraordinaire, gets into trouble putting her nosy nose where it doesn’t belong.

Her sister, Rachel, is sick and in the hospital, so Maggie fills in at her sister’s business, Wine & Bark, while she recuperates. Maggie lines up helpers at the store to help decorate in order to score an exclusive feature in a dog magazine, since they are sending a lady over to interview them. This sends Maggie into a tailspin because the Wine & Bark is cute but not magazine spread material. Thus, a quick spiffy sprucing up is just the ticket!

In the meantime, tragedy strikes. The owner of the Chic Chickie shop, Fran, is found dead by none other than Maggie and her best friend Yolanda. Who did the dastardly deed? Maggie has a lot of theories, but is she right? There are more suspects than hens in a hen house! Everyone had an axe to grind with Fran. Not only that, Maggie is being pulled in numerous directions, running her sister’s business, decorating, spending time in the hospital visiting with Rachel, doting on her uncle, and spending time with her numerous friends. Plus, Maggie has two doting boyfriends–Gus DelVecchio, restaurant owner, and Detective Brad Brooks.

Maggie realizes her new job with a cruise line will have to be put on hold until later, after she has dealt with everything. She is close to having a severe meltdown if she doesn’t quit running around like a chicken with its head cut off! Then, another person is bumped off. What’s going on? Most importantly, does she discover who killed Fran? Or will Maggie combust?

TRIGGER YAPPY is extremely energetic, creative, and hilarious with an inventive plot that will have you laughing. When Maggie Patterson learns her sister is ill and in the hospital for an indefinite period, she takes over at her sister’s business. What happens next is a riot! Maggie is running in circles, doing her best to make everything right. All the many zany, lovable characters make this story seem like one big party from beginning to end. So much happens.

There are many wonderful subplots, zippy dialogue, and a sinister mystery to uncover, which all adds up to a sizzling, sparkling story! Plus, there are many cute doggies with personalities to match that adds to the overall charm. This is a series to treasure! I can’t wait for the next installment in the ROUNDUP CREW SERIES. TRIGGER YAPPY is bursting with action and a cryptic plot that will have you guessing who dunnit! A barking good time!