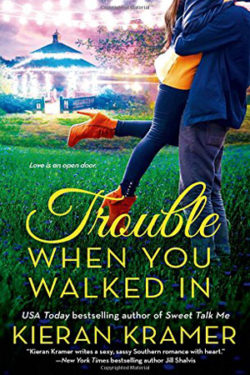 TROUBLE WHEN YOU WALKED IN by Kieran Kramer has a cute premise of a meek librarian set to defend her library’s move to a strip mall and become a county library. Boone, the town’s current mayor for the last ten years and the part-time high school football coach, is all for the move due to budget cuts and other town needs. He’s met his match when Cissie, the quiet librarian, decides to challenge him at the polls as she campaigns to be mayor two weeks before election day.

Cissie and Boone went to school together but aren’t friends and don’t socialize in the same circles–but they have chemistry when their paths continue to cross. Her grandmother, who raised her, is everyone’s Nana and has her pulse on the town. Small town Kettle Knob has a lot going on considering how small it is. There’s politics both local and county, lots of secrets and gossip, and relationship drama. The family dynamics of several of the families are unique and helped to form the way some of the characters think and behave. The secrets many keep are backfiring. What will be done about them? Will truth win out, and will someone be hurt in the process?

The characters are plentiful, but there seems to be more story to tell for each of them. There are twists and turns to the story and some closure with a happily ever after. The story flowed nicely and  kept my interest.  An epilogue would have been nice to see how the characters fared, since this book isn’t part of a series and there are some loose ends that would have benefited from being tied up.

Kramer is a new-to-me author, and I will give some of her other contemporary romances a read.