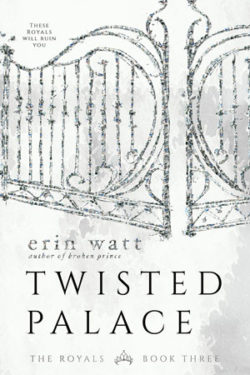 TWISTED PALACE is the much anticipated third book in The Royals trilogy, and Erin Watt delivers another extraordinary display of skill. Book two left things with quite the cliffhanger. Reed was taken into custody for murder, and Ella’s biological father, Steve – whom everyone thought died in a hang-gliding accident – is suddenly back from the grave. These books have to be read in order due to a building storyline. While they are technically YA (which is not my cup of tea) they are some of the best books I have read in years.

Ella Harper has finally admitted to herself she is in love with Reed Royal, and she is terrified he will be taken away from her. Ella is not only dealing with the murder charges brought against Reed, but all of a sudden she has an actual parent in her life and isn’t sure how to process that. Reed maintains his innocence regardless of what the prosecutors say but thinks if he can keep his family from a public scandal, it might be worth going away for a while.

All the lies and secrets are revealed in such a spectacular way that it keeps you guessing right up until the very end. The characters are so charismatic and engaging you can’t help but fall in love over and over again with all the Royals. Ella and Reed’s story is concluded, but the door is wide open for all the Royal siblings to have their say. If you read one series this year, do yourself a favor and make it The Royals by Erin Watt. You will not be sorry!