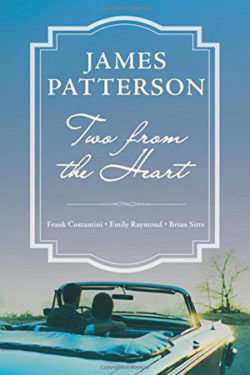 I’m a fan of James Patterson’s romance books as well as his Bookshots Flames books, so I jumped at the chance to read TWO FROM THE HEART. It’s two books in one and written by him and others. TELL ME YOUR STORY is written by him and Emily Raymond and was the more enjoyable read for me, reminiscent of Richard Paul Evans’s THE WALK Series. WRITE ME A LIFE was written by Patterson, Frank Costantini, and Brian Sitts and had more of a sci-fi feel to it, a genre that I’m not a fan of.

TELL ME YOUR STORY begins in North Carolina with a hurricane bearing down. Anne escapes unscathed, but her home and belongings don’t fare as well. She decides to take a road trip and touch base with those in her past she’s lost touch with or not seen in a while, but also to take her photography business on a different path and write a book around the people she meets and the pictures she takes.

There was a lot of soul searching and fulfillment in her journey as she put miles between her and her beach cottage. It was interesting to see Anne’s approach to life and learn the stories of those she crossed paths with and those she intentionally set out to visit. During her trip, she experienced sorrow and joy from truths learned and also closure as her dreams come to fruition along with the making of new friends. There was a nice flow to the story, and I felt I was in the car with her as she ate up the miles on her cross-country trek.  There was also a chance for a new happily-ever-after, but I would have liked an epilogue to give me better closure.

WRITE ME A LIFE seemed to be a stretch and more sci-fi. An author struggling to finish his next book is approached by Tyler Bron, a mega-billionaire who founded an aerospace company but wants a new life and not only outside of work. And he wants the author Damian to give him that life. From there things get a little crazy and far-fetched since when Tyler is transported to an unknown small desert town to begin his new life, he has no clothes, no money, no access to his accounts, credit cards or technology, and no identification. Damian is calling all the shots through his writing!

I liked the people Tyler meets up with in the desert, especially when he focuses on those around him who need help, like the school that’s on the verge of closing. His assistance and enthusiasm don’t go unnoticed. He tries to get others involved in his plans to show the school board that the school should stay open and works with the administrator, staff, and students to make that happen. He’s amazed that others are willing to help him since he’s totally unknown to them and has nothing to share except what he knows about technology, the constellations, and solar system–and no questions are asked! But Tyler is willing to use his knowledge to help. His interactions with the others were heartfelt and gave him a different perspective on not only his life but life in general.

Learning about the small town and its inhabitants gave the story a human element. Gonzalo, his grandfather, and Gonzalo’s pet rooster gave a humorous spin to the story. There were a few twists and turns to the story, especially with the writer and those he was working with on an everyday basis. There was some closure with unexpected events at the end, but an epilogue would have given me the closure I needed.

I will continue to read Patterson’s books that are in the contemporary romance genre.  I had previously read FIRST LOVE by Patterson and Raymond and it was an enjoyable read. I will look for more books that he writes.