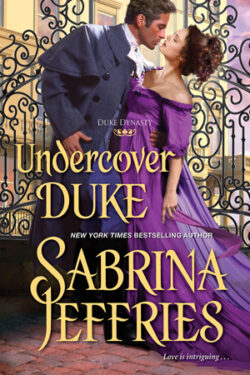 Sheridan Wolfe is the impoverished Duke of Armitage. He needs to marry a rich heiress to save his estates. However, Sheridan and his siblings need to solve the mysterious deaths of their mother’s three husbands. He re-acquaints with Vanessa Pryde, his older half-brother’s cousin, in order to question her mother. Sheridan tries valiantly to resist temptation. Will Sheridan finally let go of the past? Can he and his siblings find the culprit behind their fathers’ murders?

Miss Vanessa Pryde is the cousin of the Fifth Duke of Greycourt. She has always wanted Sheridan since his family’s return to England. Vanessa feigns romantic interest in a famous playwright to gain his interest. Her calculated scheme works, in a roundabout manner. Vanessa learns that Sheridan is secretly investigating the deaths of his mother’s husbands. Will Vanessa be beneficial in Sheridan’s investigation? Can she make her saintly duke fall in love with her?

Sheridan is so different from his older half-siblings. His phobia of losing those that he loves prompts him to keep people at a safe distance. I love Sheridan’s sense of duty and loyalty. He tries desperately to take care of everyone under his care, even stumble through his weakness with numbers. What I adore the most about Sheridan is his willingness to endure Vanessa’s shrewish mother. He knows how important family is, so he will never demand Vanessa alienate her mother.

I have been wanting Vanessa and Sheridan to pair up since book one. She is the perfect contrast to his stuffiness. And Vanessa did not disappoint me! I like how she does not make excuses for her mother’s abrasive behavior. Vanessa knows how difficult her mother can be, so she tries to spare everyone from having to deal with her, including her cousin and Sheridan. What I adore the most about Vanessa is how she does not adhere to society’s views on a noblewoman’s appetite. She refuses to starve herself over some silly rule.

UNDERCOVER DUKE is the fourth book in Sabrina Jeffries’ historical romance series, DUKE DYNASTY. It is essential to read the prior books and novella to understand the story’s sub-plot. I like how the author strategically stretches the investigation throughout the series, giving new bits of information in each book.

UNDERCOVER DUKE is a brilliant conclusion to a fun and entertaining series. I hear the author plans to write a Christmas novella involving the playwright, Juncker. I cannot wait!