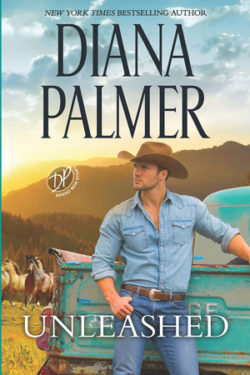 I can never go wrong reading a Diana Palmer novel with cowboys and lawmen in them.  The blueprint might be the same for many of her books, but they never disappoint.  UNLEASHED is the fiftieth book in the LONG, TALL TEXANS series according to Goodreads but the fifty-fifth according to her website.

I’ve read many of them but not all yet! This is Clancey and Colter’s story along with Clancey’s younger brother, Tad, and it held my interest from the first page to the last.

Clancey and Tad have had a very chaotic life, and they only have each other. They share a mom, who is deceased, as well as a grandfather who’s been missing for five years. Clancey acts as Tad’s guardian since his brother is in prison and his parents are dead. The evil surrounding her stepbrother, who is set to be released from prison soon, is heartbreaking.

Clancey and Tad struggle to make ends meet, and it doesn’t help that Clancey’s attracted to her boss, Colt. There are sparks between them, but they both have a lot going on in their lives as well as secrets.

The story flows nicely with a few twists and turns. There are beautiful descriptions of Colt’s ranch. Tad is a nine-year-old who fluctuates between being a typical kid and having to deal with more than his share of fears. Clancey, at twenty-three, has grown up too soon and has too many responsibilities on her shoulders.

Through it all, the siblings are both kind and helpful to others. The romance between Clancey and Colt is warm and satisfying. There’s nice closure and a happily ever after that we see come to fruition in more ways than one. I can’t wait to see whose story is next!