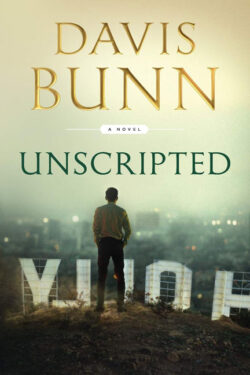 UNSCRIPTED has a lot of layers to it with complex characters set around the movie industry in Los Angeles. There are secrets, betrayals and second chances along with a mystery surrounding the ownership of an inn that needs to be solved. Danny and Megan are at the story’s core, but there are so many other characters of importance that help shine their light on them. (Note: this is a contemporary work of fiction with romantic elements, not a romance.)

Danny is a likable guy who is very earnest. He’s been dealt a bad hand throughout his life but musters through. When betrayed by his best friend, his world falls apart. But when unknown forces offer him redemption, he grabs on to it and it shows us who he really is.

Megan is a top-notch attorney not getting her due in an LA firm, but that’s all about to change.The addition of her parents to the story brings compassion and a nice contrast to all the drama. When romance sneaks up on Megan and Danny, they work to accept it while they continue in their roles as they each try to better their lives and show the world— or at least those in the movie industry—what they are made of. I loved how their friends came out in support of them over and over again. The romance definitely played second fiddle to all the shenanigans taking place.

The story flows well, and the power plays keep the intrigue at a taut level. There are a few interwoven plot lines that never resolve, though, which left me hanging. This is a stand alone novel to my knowledge, but I’d love to revisit the characters to see how the story ultimately plays out. There is some closure and a happily ever after, but the story ended abruptly: An emotional read that has romance taking a back seat in a novel centered around movie making and shady deals.