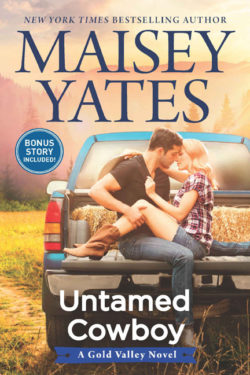 UNTAMED COWBOY is the second book in the GOLD VALLEY series that is set in Oregon and connected to Ms. Yates’ COPPER RIDGE series. There are rugged cowboys along with strong women and a few surprises tucked in.

Bennett and Kaylee have been best friends for seventeen years. They met in school when Kaylee moved to town, went to college together to study veterinary medicine, and opened a practice together in Gold Valley once they graduated. She’s loved him from afar most of that time but never wanted to ruin their friendship. He of course is clueless and dates a string of women, and even gets engaged to someone  (not Kaylee) before they break up and go their separate ways. Kaylee is over the moon about the break up because now maybe she has a chance to date him. When their signals stop crossing—because they see each other as more than friends—neither one knows how to deal with it since they don’t want to ruin their friendship if things fall apart.

It’s at this point, fifteen years later, that Bennett finds out he’s a dad thanks to an old girlfriend who lied to him. When his son, Dallas, joins the family, there are some rough spots. Dallas is starved for love, structure, and a family. This is a wonderful romance filled with family and friends. There are a few hiccups along the way until Bennett and Kaylee learn to communicate better.

The descriptions of the land and town are rich and add to the story. The epilogue is a nice touch, but since it jumps ahead three years, I felt left out of the happily-ever-after, although there’s still a surprise looming. There are more books in the series, and I hope to be reunited with characters we’ve met before over and over again.

At the back of the book is a bonus novella, MAIL ORDER COWBOY, GOLD VALLEY #1.5. It’s a quick read, and while it takes place in Gold Valley, we’re introduced to a new family, the Reids. Once again there’s a surprise child in the story, Lily, who’s the result of a one night stand. Jackson had no idea she existed until the mother decided he could raise his daughter himself.

Jackson is all cowboy, but knows he has to do right by Lily. He puts an ad out for a nanny and gets more than he bargains for in Savannah, who considers herself tall and plain. Watching their interactions is wonderful, and as their attraction grows, look out! They burn up the pages. There’s nice closure to the story with more of Jack’s siblings needing their stories told.