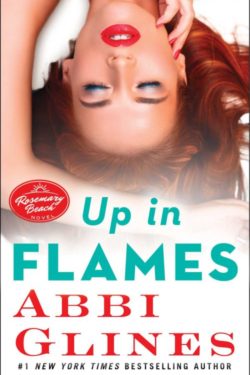 Nan Dillon is the woman everyone loves to hate. But lately she has been doing things in and around Rosemary Beach that make her less of a villain and more of a human. Watching her brother and his friends create these beautiful families is causing an ache inside her she never thought she would suffer. Will Nan settle down and want an actual relationship, or is that for other less damaged people?

This is the thirteenth book in the Rosemary Beach series, and while technically it could be read as a stand-alone, you would really not appreciate the depth of depravity that Nan has sunk to in the past. Warning for those who need it: there is a love triangle and heavy drama throughout the book. But it wouldn’t be an Abbi Glines book without it. I have always thought I was a “Nan-hater” and there was no way she could ever have redeeming qualities–I was wrong. While I will not run out and buy a #TeamNan t-shirt anytime soon, I can no longer say I hate her now either. We get to see that Nan does indeed have a softer side, and it looks good on her for a change.

Nan has been in an honest, healthy, non-scheming “almost relationship” with Major for a while now, but that’s just the problem. It is not a relationship but more of an arrangement. When they are together, he devotes time to her, but he is always getting texts and calls from random girls. Nan is far from stupid and realizes exactly what he is up to. Instead of getting angry she gets even…

Vegas seems to be the best place for Nan to get Major out of her system and move on to bigger and better things. And boy, does it ever do the trick. A suite in the Bellaggio Hotel is no Rosemary Beach, but it will do while Nan meets her match in Sin City.

Major Colt is a character we have known for a while, since he is Mace’s cousin. But his storyline was quite murky. Dating Nan but ultimately sleeping around with all of Rosemary Beach is not a bright idea for someone who needs to keep a low profile. Will Nan get him to change his playboy ways? Or is he bound to break her heart too?

Gannon Roth-Copeland is a man on a mission–both literally and figuratively. While we know him as the dangerous spy guy that has no problem killing people if need be, he is showing Nan the alpha-dominant Gannon who sets her heart on fire.

I love the development of Nan’s character and went from actually wanting her killed off in previous books to feeling sympathy for her, shedding a tear or two in this one. Shows how much growth and complexity one person can go through over the years and still come out a decent person. I can’t wait for the next book that brings Rosemary Beach to a close. Abbi Glines is one author not to miss!