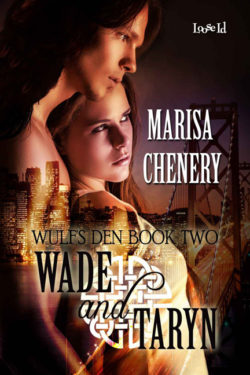 In the second book of Marisa Chenery’s Wulf’s Den series, WADE AND TARYN, Taryn Davies has not had it easy in life. Her mother’s died when she was a child. She was involved in a controlling and ultimately abusive relationship. And finally, her beloved uncle died. Now she is determined to make the vineyard that her uncle left her, The Pines,  a success. Potentially getting a contract with Wulf’s Den is one step closer to making that success happen. Kneeing the brother of the owner and leaving him rolling around on the ground because he came on a little too strongly might put a small crimp in that success.

Wade Thorsson might be one of the younger members of his pack, but he wants what all of the other unmated males want–a mate to call his own. What he didn’t expect was his mate to unman him in the middle of a parking lot because he moved too fast. But Wade is not going one to give up. Taryn is his mate, and he’s determined to make her his. Going to her winery and spending time with her allows him to get to know his mate, and for her to get to know the real him. Letting her guide how intimate they are is a sacrifice he’s more than willing to make.

But things get complicated quickly when Beowulf sends some of the pack to help with the harvest at the vineyard. Because the past has a way of coming back around, and when it does it can leave turmoil in its wake. An old hatred is reborn, along with a reunion between a father who thought his daughter was dead and a daughter who thought her father had left before she was born. A cascade of hate, hope, love, and violence is on the way to The Pines, and if Wade and Taryn aren’t careful, their happily ever after may end in tragedy.

I found WADE AND TARYN to be both cute and tragic at the same time. I laughed at reading the initial meeting between Taryn and Wade, especially at how she handled him and again what happens when they meet up at the vineyard. There are twists and turns within the story that keep the pace active. The humor thrown into the mix is a nice offset for the more intense scenes and revelations about what happened in the past. All in all, this was a wonderful read, and I absolutely loved the mythology thrown into the mix with the storyline.