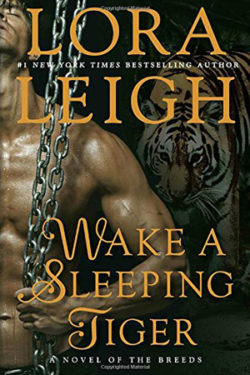 Lora Leigh’s Breed series has become one of the most popular and well known in the paranormal genre and has shot her to the top of the bestseller list. Each new tale earns her many new readers and keeps her old fans coming back for more. The story of Cullen and Chelsea is no exception.

Cullen Maverick may be the name that he is now going by, but Cullen had another life once that made him the man he is. Cullen’s breed genetics may be recessed, but that doesn’t mean his instincts can’t rise to the surface at the worst possible moment. One woman brings out the animal in him, and that woman is Chelsea. She is determined to fight him at every turn and show him that she is just as big and bad as him. However, Chelsea is about to find out just what happens when you push the beast to his limits.

Chelsea Martinez has been treated like a princess her entire life. She’s been told that working in the Law Enforcement Agency as anything other than a secretary is much too dangerous. Chelsea has no intention of sitting behind a desk for the rest of her life and playing it safe. If Cullen thinks he’s going to run her life and treat her like a child, then he’s about to be proven wrong. When she quits working for him and goes off on her own, she sees a new side of Cullen, not just protective but possessive. Could his breed genetics be finally coming to the surface?

WAKE A SLEEPING TIGER is an exciting read with twists and turns all over the place.  Readers will enjoy the constant state of tension between Cullen and Chelsea. The heat, as always, is smoking. Lora Leigh knows how to pen tales that keep the passion high and the plot rolling. Old characters make appearances, and we get more insight into our favorite breeds. WAKE A SLEEPING TIGER is sure to be another popular book in the breed series and earn many more fans for Lora Leigh.