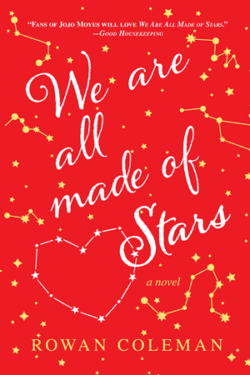 Coleman’s WE ARE ALL MADE OF STARS is women’s fiction that has a darkness to it since it deals with death, the aftermath of war, hearts broken and a care center where people go to die when in the end stages of their life or they need some type of palliative care.  Stella, a nurse, works in the hospice facility and to comfort patients and ease their passing she writes letters for patients who choose to dictate one so they can be mailed to someone important to them once they’ve died.  It was interesting to read the letters especially since they gave insight to the person writing it.

There were a lot of stories going on at once but all were interrelated.  The story was told from the different character’s points of view and the chapter would be titled with the character’s name.  The stories were told by Stella, her husband Vincent, Hope who has cystic fibrosis and  Hugh who seems out of place until I got deeper into the story.  The story was told over a seven day period but there were a lot of details regarding their pasts and past relationship with another character.  The story flowed from the first page to the last and the characters were multi-dimensional with a lot of angst, anger, fear and unhappiness until wisdom may have been reached and they see things from a different perspective..

There were family and friends, hurt, anger, fear, sorrow, nightmares, relationships, illness, death, laughter, happiness, tears, reminisces, some loving and love.  My emotions were involved throughout.  I cried and sometimes my stomach would actually be in knots. There was a vividness to the author’s descriptions of the homes, the care center, the streets and the garden that made me feel that I was in England especially with some of the words and expressions that were used.

The prologue set the stage of what was to come and the epilogue tied up most of the loose ends. There were twists and turns to the character’s stories and also demons chasing most of them – some of their own making.  There was one cat named Ninja, Jake or Shadow based on where the cat hung out.  It was fun to watch the cat’s antics based on where he was but also how Hugh realized that the cat was leading multiple lives. There was some closure with a few happily ever afters in the offing but I would have liked better closure.

Coleman is a fairly new to me author only having read THE DAY WE MET which was also edgy.  I look forward to reading more of her books and will be adding them to my always growing TBR pile.