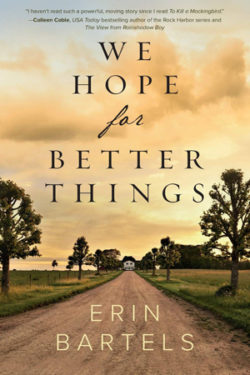 It is rare to read a book and then count the days until you can open it and read it all over again. Such is the case with WE HOPE FOR BETTER THINGS. From the title alone, you can assume that this tale explores the past and its impact on the present, and you would be right.

Elizabeth Balsam loses her job as a journalist after a city bigwig causes an uproar when Elizabeth starts to dig into his past. In the midst of her work drama, a stranger asks her to return a box of photos to a distant aunt she didn’t know she had.

With new time on her hands, she visits her great aunt, Nora, and is introduced to a family history that goes back to the times of slavery. She learns the story of Nora’s mother, Mary, a woman forced to run a farm when her husband enlists in the Civil War. In his absence, her home becomes a refuge for runaway slaves, to one of whom she develops an especially close relationship.

And then there’s Nora, a widow who was in an interracial relationship in Virginia in the 1960s. Her husband disappeared after checking on his family during a riot, and their brief marriage left her angry and confused. Elizabeth breathes in the history of the home and of the occupants, both past and present, that helps to shape her own story.

Erin Bartels weaves a complicated and fascinating story about three generations of strong women forced to make some tough decisions. This is an excellent read with rich characters and an inspiring message.