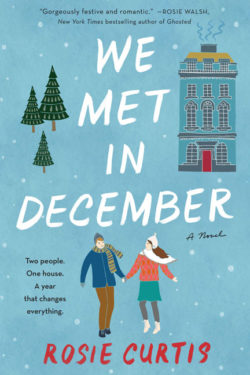 WE MET IN DECEMBER had a lot more promise than what was delivered in this debut novel. There were so many unanswered questions by the end of the book, even if there were some happily ever afters. I felt we only scratched the surface on most of the characters.

Jess and Alex are housemates, along with several others living in their friend’s home. Both are starting new careers. When they meet that first night, there’s definitely an attraction, but neither acts on it. By the time either wants to, it’s too late and they’re firmly in the friend zone. Jess understands Alex better than most, and he’s always there when she needs a friend. Yet in the background, their attraction simmers.

The sights and sounds of London shine through as we take walking tours with Jess and Alex. Jess’s best friends are woven throughout the story, as are hers and Alex’s families.  There’s dysfunction in Jess’s family that shows why she acts the way she does.  I love her connection with her grandmother and how they keep in contact through pictures on Instagram!

There are a lot of story lines going on at once. The flow is sometimes choppy since the story is told from both Jess’s and Alex’s perspectives. Sometimes while reading, I had to check who was speaking. There’s some closure with the epilogue that takes place a year later, but I would have appreciated more.

A fun though somewhat stilted read.