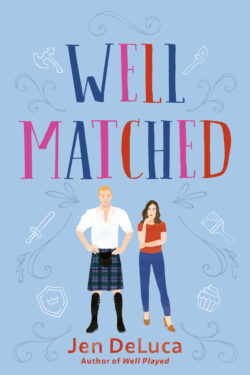 If it can be faked, the characters in Ms. DeLuca’s new novel, WELL MATCHED, will do it. A macho man, a shy single mom, a renaissance fair, genuine laughs and more round out this hard to resist, perfect escapist fare plot. It stars April Parker, who has a teenage daughter soon to go to college. April still is recovering from her accident and is socially inept, preferring her own company. She plans on redecorating her house, so she can sell it and move out, after her daughter leaves. Although, a sexy gym teacher, Mitch Malone, enters her life. Will he complicate things?

Muscular, macho Mitch is known as a handyman, gym teacher, and Kilt man in the renaissance faire. He’s known April for a while and their paths cross. April needs a handyman and Mitch needs a fake girlfriend. They mutually agree to help one another. His family teases him about marrying. He asks April to come with him to his family reunion. April agrees, only the weekend turns into a three day affair! Time spent with Mitch and his family has melted April’s heart. Mitch is bewitched by the beautiful babe. Will their fake relationship move into the lovers category and more?

The action is fast, the characters are likable and the one-liners never stop in Ms. DeLuca’s new story, WELL MATCHED. A sparkling, sexy story starring two friends who fake it, to make it appear there is something more, when actually there isn’t or is there? I loved the bantering stars who are clearly made for each other. No one writes like Ms. DeLuca does with her distinct view of Renaissance faires, skilled dialogue and divine story lines. Sheer reading enjoyment, with its likable cast and powerful message to single moms everywhere. WELL MATCHED is like a delicious candy bar. A story to savor!