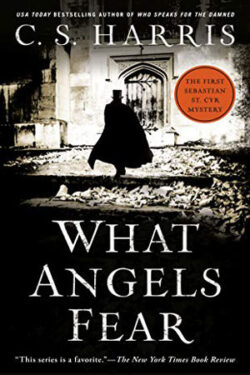 WHAT ANGELS FEAR: A SEBASTIAN ST. CYR MYSTERY by C.S. Harris is book 1 in the historical series.
Set in a fog-enshrouded 1811 London, the threat of revolution haunts the upper classes of King George III’s England. The body of a beautiful young woman is found savagely murdered on the altar steps of an ancient church near Westminster Abbey. A dueling pistol discovered at the scene and the damning testimony of a witness has the police in search of Sebastian St. Cyr, Viscount Devlin, a young nobleman trying to put his life back together after his experiences in the Napoleonic Wars.

Now a fugitive running for his life, Sebastian uses his skill as an officer during the war to catch the killer and prove his own innocence. While on the run, he reconnects with Kat Boleyn, the woman who broke his heart years ago. But nothing is as it seems, and the truth may hold the key to the future of the British monarchy, as well as to Sebastian’s innocence.

While there were plenty of red herrings, I guessed fairly early on who the murderer was. But if you love historical mysteries with intrigue and espionage, a cast of interesting characters, and a dash of romance, this series is for you.