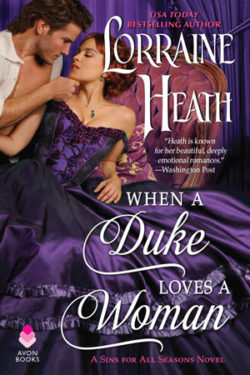 Superbly seductive and emotionally intense, WHEN A DUKE LOVES A WOMAN is the second book in the Sins For All Seasons series. Gillie Trewlove, a beautiful, skillful and self-sufficient tavern owner, is stunned when a man is brutally attacked out behind her tavern. The man, Thorne, an unbelievably handsome duke, is bleeding profusely. Gillie, not knowing who he is, takes him in, sends for the doctor, and cares for him until his health gets better. Dangerous to her reputation, sure, but Gillie keeps her emotions in check and handles her four brothers’ concerns with aplomb. Thorne is deeply touched that a stranger, a beautiful woman even, offers to care for him. Threads of attraction enticingly weave between them. Is it kismet?

Thorne, Duke of Thornly, headed to the Whitechapal area initially because he was supposed to wed but his bride never showed up. He learned his absent bride, Lavinia, headed towards Whitechapal. Thus, his unfortunate non-betrothal landed him in dire trouble, violently mugged then rescued by a pretty lady, highly embarrassing indeed. Hopefully, he can sway Gillie to help him find Lavinia to learn why she left. Secretly, Thorne is charmed by Gillie and strives to spend extra time with her.

He knows they are from diverse backgrounds and is duty bound to find a wife to honor his stern parent’s wishes, which is uppermost in his mind. Only, there’s something about Gillie, her charisma, confidence and compassion, that captures his heart. Will Thorne declare his love for her? Will Gillie’s firm upbringing concerning men keep her from taking a chance on Thorne?

WHEN A DUKE LOVES A WOMAN is a battle of emotions and expectations. Gillie and Thorne are perfect together unbeknownst to them. Each are kind and generous. Thorne never hopes to wed Gillie since she swears off men and both are raised rigidly with regulations. However, Thorne steadfastly woos her, showing his love and concern for her. They both have hurdles to overcome, which keeps them apart. I repeatedly wondered if they were meant to be or not. Thorne’s mom is a dragon and a prickly thorn in his side. The author does a splendid job of creating believable characters and a depressed atmosphere depicting the lower echelon of society in London. I could imagine Gillie’s tavern from Ms. Heath’s expert descriptions, sweaty men, smell of beer, clinking of glasses, that swept me away to another place and time. However, I was moved to tears by the sensitive storytelling and the magnificent ending. Simply divine! WHEN A DUKE LOVES A WOMAN is just like a fine wine with mellow notes and a spicy sweetness.