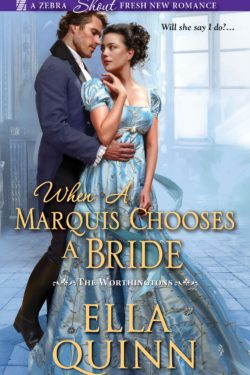 WHEN A MARQUIS CHOOSES A BRIDE, the second book in the series The Worthingtons, Dominic, Marquis of Merton, was raised by his Uncle who turned this young boy into a stodgy, pompous, young man who is skeptical of a host of things including but not limited to: innovation, the destitute population, and most dangerous of all, true love. He is uptight, honorable and aware of his responsibilities, having had them drilled into him by his bachelor uncle.

At first Dominic is insufferably arrogant and he is always careful to do things the proper way a peer should. According to his uncle Dominic should not marry for love, but for status and only have lukewarm feelings for his future wife. The Uncle was positive a love match, and caring too much, would be Dominic’s downfall.

When Dorothea’s mother is injured, Dorothea, or Dottie as her family calls her, joins the Worthington household in London for the season to make her debut in the ton. Dottie is the granddaughter of the Duke of Bristol, and no novice to the rules of society. Her sharp wit and forthright nature has the household in a tizzy. Especially the Worthington’s Cousin Dominic.

In WHEN A MAQUIS CHOOSES A BRIDE, you watch Dominic change into a reasonable human being through the love and caring of Dottie. Never one to shy away from a challenge she tries to puzzle out the reason the handsome Dominic shies away every time they start to get intimate.

He cares for Dorothea and finds himself rescuing kittens, little boys and women in need. Dominic’s whole world opens up and he finally realizes that all the lessons he has been taught by a domineering uncle are being turned upside down.

This is a wonderful story and it is fun to watch the uptight Maquis turn into a relaxed Maquis. The innocent Dottie gives herself to Dominic in a passionate night of love making.

Did I mention, plotting, kidnapping and danger? This story has it all!

I really enjoyed reading WHEN A MAQUIS CHOOSES A BRIDE. I received this ARC print book from ROMANCE JUNKIES REVIEWS, for an honest review.