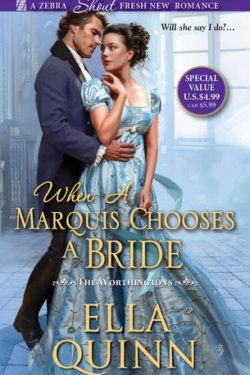 Although Dorothea Stern, granddaughter to the Duke of Bristol, grew up in the country, she was educated on the ways of the nobility. She has been looking forward to having her first Season in London with her best friend Charlene. But her plans fell through when her sponsor had to bow out and her mother’s arm was broken, leaving Dorothea to take care of her siblings. So she is thrilled when a letter arrives from her best friend’s sister Grace, who has agreed to act as her sponsor. Dorothea also has empathy for anyone or anything that is hurting. Taking up for the underdog, she frequently ends up bringing home strays and orphans. Promising her parents that she won’t bring any strays to Grace’s home, Dorothea and her maid travel to London and the start of the Season. Almost immediately, she meets a handsome man when she is at her most unseemly and she has trouble getting him off her mind.

Dominic, the Marquis of Merton, was raised by his uncle after his father died and his mother suffered from a temporary illness. Like his uncle, Dominic is a staunch, no nonsense lord of the realm and expects everyone else to be the same way. When his mama decides not to come to London for the season, he decides this is the perfect time to find a wife. Meeting Dorothea as she defends a beaten dog, he becomes fascinated by her. When he discovers her father is just a baronet, he tries to stay away from her, especially when he discovers that she is under the guardianship of his cousin Matt, the Earl of Worthington, a cousin who has made his wards off-limits to Dominic. But he is finding it harder and harder to stay away. Her entry into his world makes his life a bit chaotic, to the delight of his mama, who has traveled to London after all, to subtly assist her son in finding a bride. She wants him to have more joy in his life, instead of following his uncle’s boring example.

One of the rules that Dominic’s uncle has instilled in him is not to marry for love, but the stuffy lord is finding it hard to resist Dotty and cannot imagine making any other woman his wife. In the end, will he choose to follow his uncle’s rules, or will he select the woman who holds his heart?

A delicious Regency romp, WHEN A MARQUIS CHOOSES A BRIDE, the second book in bestselling author Ella Quinn’s THE WORTHINGTONS series, is a witty, sexy historical romance that will make you sigh one moment and laugh out loud the next. The chemistry between Dominic and Dotty is undeniable and the love between them leaps from the pages. Watching how falling in love affects Dominic as he gets drawn into situations that pull him out of his stuffiness is hilarious, yet heartwarming.

Fans of this series may remember Dominic from THREE WEEKS TO WED, as cousin to the main character Matt Worthington. Matt and his bride Grace are secondary characters in this novel. Dotty is also best friends with Grace’s sister Charlotte. The two friends have always dreamed of coming out together. So since Grace is already sponsoring her sister, she agrees to do the same for Dotty. Although this book can be read as a standalone, I recommend also reading the first book THREE WEEKS TO WED just because it is such an enjoyable tale, plus you will be introduced to Dominic before actually reading his story. This opposites-attract novel is a pure delight! Lovers of historical romance will not want to miss it. The next installment in this wonderful series, IT STARTED WITH A KISS, is due to release March 28, 2017.