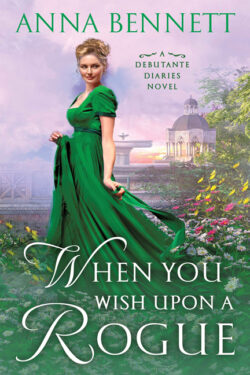 WHEN YOU WISH UPON A ROGUE by Anna Bennett is my introduction to this author’s talent, thanks to the publisher who sent me a copy. Even though it’s the third book in the DEBUTANTE DIARIES series, it was easy to read without prior knowledge of the first two books. It’s fun and entertaining with a great beginning.

Miss Sophie Kendall is looking for a new place to hold her secret meetings with her debutante group. Following a lead on a vacant building whose door is unlocked, she wanders inside only to be startled by the owner.

Henry Reese, Earl of Warshire, suffers from nightmares created by his time at war. Unable to sleep, he comes to his building to do something away from his home. Sophie not only surprises him with her bold, fearless attitude, she also charms him with her delightful positive attitude and her ability to calm him.

This novel’s plotline is interesting and lends itself to some fun discussions among the members of the secret debutante underground. Sophie’s best friends, Lily and Fiona, are married, something Sophie longs for as well. Unfortunately, Sophie’s father has ruined their family’s finances, and it’s up to Sophie to marry well enough to save them. Her father finds her a man based on what he’ll do to help them. Sophie supposes he’ll do well-enough and, hopefully, she’ll learn to love him.

Reese and Sophie begin a friendship innocently, but it soon turns into something much more sensual. Once they began meeting in secret and moving forward with their attraction to one another, I lost interest. That’s because Sophie is promised to another, yet she sees nothing wrong in dallying with Reese. Reese is so grumpy and downtrodden that I often wondered what Sophie saw in him.

Even though Sophie isn’t married yet, her sexual exploration with Reese seems like infidelity to me, something I dislike in romance novels. With that in mind, I never got back to my initial enchantment with these characters because of my annoyance with their attitudes.

It all works out in the end and makes much more sense at the conclusion, but there was too much page time devoted to their sexual exploits before professing their love for one another. On the other hand, the buildup of their attraction and all the sweet things Reese does to woo Sophie is very well done. That’s why it’s so hard for me to rate this book and how it landed at 3.5 hearts.

It’s a clever plot with fun characters, but I couldn’t renew my connection to either protagonist due to their aloofness regarding their situation.

I will definitely read more by Anna Bennett, a new-to-me author, as her storytelling is engaging and her craft is well-honed. I’m intrigued by the first two books in the series, FIRST EARL I SEE TONIGHT and THE DUKE IS BUT A DREAM, Fionna and Lily’s stories, because I really enjoyed their interaction with Sophie in WHEN YOU WISH UPON A ROGUE. I’m curious how they acquired their happy-ever-after, and if they’re as mischievous as they seem.