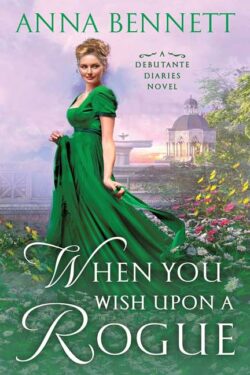 WHEN YOU WISH UPON A ROGUE by Anna Bennett embodies the empowerment of women and the attitudes of both British society and the British male. This is the story of Sophie and her getting married. Sophie is the last of a three-girl friendship that started in boarding school and has continued through two marriages, with Sophie’s being the last. But while her girlfriends married men they love, Sophie is entering in an arranged marriage to a man who will save her family from destitution. The story opens with Sophie chairing a meeting of a secret women’s group where they gather to talk about a column printed in the local newspaper. The group is a way for women from all walks of society to exchange information about being treated by men. The group is getting too large for where they are meeting, and Sophie goes to check out an empty shop that they can use to meet. Sophie encounters a man (The Earl of Warshire) who is occupying the empty shop and wants to know what Sophie is doing there. Now the story gets really interesting as Sophie and Henry, the Earl, begin a very unusual arrangement. As Henry and Sophie get to know each other, the arranged marriage of Sophie to another is still continuing. Things come to a head when Sophie must commit to the arranged marriage and make an announcement of her engagement, as the Viscount has already begun to pay her father’s debts. Henry accepts his fate that he will not have Sophie for himself, until something happens with Sophie and Henry realizes he needs to rescue her, not financially but upholding her reputation. The story ends happily with another unexpected twist of fate. This was a very enjoyable story with a lot of information about how Sophie and Henry spend their time together.