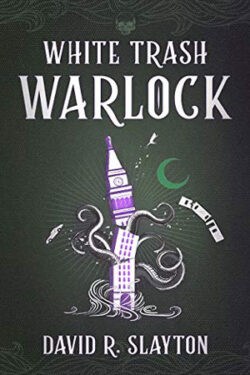 WHITE TRASH WARLOCK is about a young magician named Adam Binder from rural Oklahoma who travels to Denver, Colorado, to save the soul of his brother’s wife. He arrives at his brother’s home in his estranged father’s ancient Cutlass and hopes to not only save his sister-in-law, but find his missing father as well.

A giant malevolent spirit hovers over Denver, possessing innocent people and forcing them to do its evil bidding. It can only be seen in the spirit realm, which is populated by elves, gnomes, leprechauns, and other magical beings. His ex-boyfriend, an elf, is assisting him in his quest. At the beginning of Adam’s dangerous journey, he saves the life of a cop named Vic when he gives the injured officer a small thread from his life force. The two end up falling in love.

Adam is a complex character with layers of sensitivity and bravery, and he’ll do anything for the people he loves. He’s selfless, kind, and easy to love. He barely tolerates his brother, who committed Adam to a mental institution when he was a teenager, but his brother is family, and Adam is deeply committed to saving his brother’s wife at any cost.

This was an entertaining MM urban fantasy that explores a magical world that resides within the real world for those with the power to see it. There is a lot going on in this story with multiple subplots and a very large cast of characters, each with a stake in the outcome of Adam’s quest.

WHITE TRASH WARLOCK is book one in the Adam Binder Novels series, and is followed by its sequel, TRAILER PARK TRICKSTER.