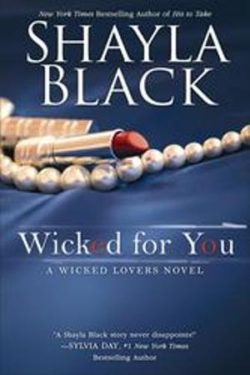 Mystery Mulins has been in love with Axel Dillon since he rescued her from a kidnapper six years ago, but Axel rejected her advances, and she’s never quite gotten over that fact.  She’s determined to have one night with the man she’s never forgotten (even if it’s wearing a disguise so he doesn’t know who she is) and then getting on with life. Only things don’t go exactly as planned.

Sure, Axel accepts her proposition, and they do enjoy of evening of carnal bliss before she slips away, but the past has come back to haunt her. It’s clear that someone is still out to get her, and she needs Axel’s help again.

Axel’s already caught on to the identity of his mystery woman, and he’s not at all happy with her deceit. In fact, he’s downright incensed, but they’ll be spending a lot of time together while he protects her. And he intends to make her pay for her trickery in every delicious way imaginable.

Shayla Black never fails to win me over with every single new release in this series. WICKED FOR YOU is no exception. Axel and Mystery have an undeniable sexual chemistry. Throw in the danger aspect and the story becomes positively steamy. There’s a lot of push and pull between them since Axel’s out to protect her while Mystery’s dead set on doing what she wants to do – and trusting people she believes to be “safe.” Once their relationship becomes sexual she has a hard time keeping her emotions in check. Trusting Axel with not just her physical well-being, but her heart as well, wears on her. And that shows throughout the storyline. Fortunately, Axel isn’t a man who’s easily thwarted by a difficult woman – in fact he seems to find her downright intriguing.

WICKED FOR YOU is a wonderful addition to Shayla Black’s WICKED LOVERS series.  This series as a whole has captured my interest, and I’ve eagerly awaited and pre-ordered the books as they’re announced so that I don’t miss any. Plus the books can each stand alone, so pick up a copy of any of them and you’ll still be able to fully appreciate the charming characters, intriguing plot, and emotion-filled love story, not to mention the smoldering sex scenes.

Here’s a list of the WICKED LOVERS titles in order so far:

WICKED ALL THE WAY (novella)

HOLDING ON TIGHTER – scheduled to be released February 7, 2017