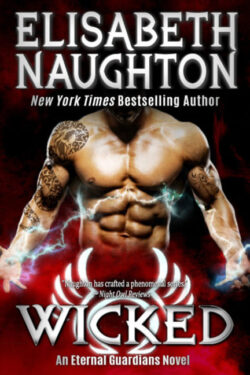 Zagreus is the son of Hades, the God of the Underworld, and Persephone. His enemies know him as the Prince of Darkness. Zagreus never imagined his soulmate would be born as an Argonaut. Fate entwines their paths once more. Zagreus intends to do right by her in this lifetime, but the obstinate female refuses to cooperate. Can Zagreus keep history from repeating itself? Will Talisa be his salvation? And what new revelations will Zagreus learn about himself?

Talisa is the daughter of the Eternal Guardian’s leader and a descendant of the Horae. She is the only female born with the Argonaut’s markings. Talisa grows frustrated when the Guardians refuse to accept her into their ranks. She sneaks off to the human world to blow off some steam only to encounter the Argonaut’s nemesis. Something about Zagreus calls to Talisa. She soon finds herself his captive. What destiny truly awaits Talisa? Can she help Zagreus from succumbing to the darkness for good?

I have always had a soft spot for redeemable villains, especially ones who have been tortured and wounded. I adore Zagreus’s personality and surliness. His demeanor and behavior remind me of my favorite Dragonball Z character, who is consequently a redeemed villain too. What I love the most about Zagreus is his willingness to sacrifice everything to protect Talisa, the nymphs and silens in his care. His ultimate sacrifice will break the endless cycle he and Talisa fell into for good.

It took me a while to warm up to Talisa. She came off a little headstrong and self-centered for my tastes. However, my thoughts changed as the story progressed, and she encountered Zagreus. I understand and empathize with Talisa’s annoyance at the Guardians’ continued refusal on accepting her because of her sex. It had to be a bitter pill for her to swallow, especially since she too was born with the Argonaut markings. What I like the most about Talisa is how she takes responsibility for her actions. When her willfulness jeopardizes the nymphs’ safety, she steps forward to protect them against their enemies.

WICKED is book nine of Elisabeth Naughton’s paranormal romance series, ETERNAL GUARDIANS. The last book I read in this series was in 2013. Sadly, that means I have not read the prior three books nor the novellas, so I felt as if I missed a great deal. However, that did not hinder my ability to follow the plot and characters. I still like this author’s unique spin on Greek heroes and mythology.

WICKED is a captivating tale of two soulmates breaking free from their reincarnation cycle to be together. I hope Maximus’ book is next! I cannot wait to see what female draws him from the darkness!