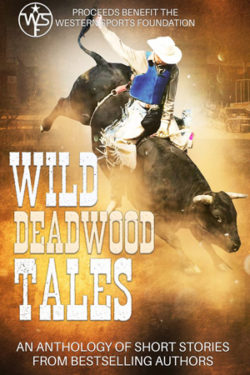 WILD DEADWOOD TALES is an anthology that has seventeen short stories, one by each of the listed authors.  I’ve only read stories by a couple of them.  I’ve always been partial to Western romances and all the books have Deadwood, South Dakota front and center.  The stories and characters are all so different from each other and span the from past to the present as well as different genres. All proceeds benefit the Western Sports Foundation.  Authors giving back!

GOTTA HAVE FAITH by Lizbeth Selvig

GOTTA HAVE FAITH seemed like it was over before I got started, but there was so much packed into the story of bull riders and rodeos set in the present day. The characters had a depth and strength to them. There were a few unexpected twists and turns to the story, even though it was short. Faith and Bo had an immediate attraction when they met, though it turned sour quickly. Faith’s brother, Luke, is there for her no matter what. There was a hint of what could happen next but, unfortunately, I didn’t get the closure I needed. It was an enjoyable read that had me chuckling and also saying, oh no!

UNEXPECTED CALAMITY has the characters of Calamity Jane and Wild Bill set in Deadwood in 1878. It’s a mining town and leaves much to be desired, especially with an outbreak of smallpox. A quick-paced and enjoyable read that sheds a kind light on Jane as she helps nurse others back to health, all the while seeing Wild Bill’s ghost. We see several sides of Jane, and her character wasn’t anything like I expected. There was nice closure and Jane had peace at the end.

TRICKS is a contemporary romance with the Deadwood Rodeo in the story. Tandi is a trick rider with Gypsy blood. She’s just graduated high school, isn’t interested in college, and recently broke up with her boyfriend. Her father gives her an ultimatum that she has one month to figure out what to do with her life. Her friend, Whitney, wants to help her on this path but has cowboys and fun in her sights. There was a lot of story packed in with a few happily-ever-afters and closure too. This story had me smiling throughout.

RESCUING RAVEN is set in the Dakota Territory in 1876 and has many of the same characters as the short story in this anthology, UNEXPECTED CALAMITY by E.E. Burke. Charlie and Raven are from two different worlds, but something is calling to them. They feel the rightness of their feelings even if others don’t. Nice flow to the story and vivid descriptions with unexpected closure.

ONCE UPON A DEADWOOD DREAM by Amanda McIntyre

ONCE UPON A DEADWOOD DREAM is set in Cheyenne, Wyoming in 2017, before moving on to Deadwood. Crystal is not sure what to do with her life as she works in her family’s general store. When her great-great-great grandmother comes to her in a dream, needing her help, that’s what Crystal sets out to do. She goes to Deadwood and works in a reenactment troupe about Wild Bill, who had been married to said grandmother right before he was killed. There are some ghosts, some theatrics not only in the theater, and ultimately love. There was a nice flow to the story and some closure.  I was happy to see that the story continues in WORTH THE WAIT, which is part of the LAST HOPE RANCH series.

A GIFT OF GOLD by Maggie Ryan

A GIFT OF GOLD has us back in the Deadwood, Dakota Territory in 1879. Who says dreams can’t come true? Lorelai is a young woman who has no family left. Her mom died when she was only seven, her brother was killed in the war, and her father died of an illness several months before. When Bennett, her brother’s friend and her suitor, left on a mysterious trip, she felt more than a little annoyed. She felt abandoned and doesn’t appreciate it when he strolls back in her life. Nice flow to the story and fast-paced with a lot of details. The story had a happily ever after and nice closure.

MAVERICK SEDUCTION has us back in the Deadwood in the present. It was quick paced and chockful of all things cowboy. Sean is entered into a charity auction by his sister, but when he gets stage fright, someone comes to his rescue. Is it someone he knows? The story has a nice flow with heartwarming appeal, lovely characters, and a chance for a happily ever after. I would love to meet up with the characters again.

SAVING DALLIE has us back in the Deadwood, Dakota Territory in 1878 with real heroes that are not welcomed by some of the unsavory residents, especially the brothel owner we’ve met now in several stories in this anthology. When Beau and Jules, the good guys, set to rescue Dallie from those who supposedly love her, she doesn’t know how to react. Luckily, she figures things out quickly, and her life is changed for the better. A fast-paced read with a nice flow and a happily ever after. Sometimes the good guys do finish first! Ms. Jager is becoming a favorite author of historical romances set in the west.

BEST RESULTS has us back in the Deadwood in the present day. River and Adam are best friends who grew up together as orphans and are going into business together owning a ranch. They both do DNA tests to see if they have other family, and one of them is in for a surprise. Heartwarming contemporary romance set in the west that left me wanting more. There was a nice flow to the story and a casualness to it as well.  Some closure but I was left wanting more.

THE BROTHERHOOD by Peggy McKenzie

THE BROTHERHOOD has us back in the Deadwood, Dakota Territory in 1877. This is another story about an orphan but also about a family without a wife or mother. Jenna, the orphan, reminded me of Amelia Bedelia and Pippi Longstocking from children’s books. She has the best intentions, but something always goes wrong. This story was heartwarming with the brotherhood of boys who lost their mom to an accident a year ago and whose father was injured in service to his country. There was a nice flow to the story that had me chuckling at spots and wincing at others. I found some closure with a happily ever after.

A RISKY PROPOSAL by Megan Kelly

A RISKY PROPOSAL has us back in the present day with Callie and Rome in love, but Callie has doubts. She never wanted to date a bull rider, and that’s just what she’s doing. You can feel her fear. When things are taken to the next level, Callie really doesn’t know what to do. The story flowed smoothly, and I liked the characters. There were family and friends along with the rodeo and their dreams. An enjoyable romance.

THE GAMBLER AND THE PREACHER’S DAUGHTER by Teresa Keefer

THE GAMBLER AND THE PREACHER’S DAUGHTER has us back in the Deadwood, Dakota Territory in 1877. Letty and her father, a preacher, move from civilized Pittsburgh to the rough and tumble west. She’s not happy about the circumstances, and it continually gets worse until she takes matters into her own hands. Unfortunately, I found the story too short with lots of loose ends and no closure at all. Though I enjoyed it, it was lacking.

TIMING IS EVERYTHING by Nancy Naigle

TIMING IS EVERYTHING has us back in the present day in Deadwood for a wedding.  When Kendra runs into her boyfriend from eight years ago, there are enough sparks flying to start a fire! This is a nice second chance romance with a good flow and a happily ever after, all based in a setting I’m getting to know fondly.

THE SCHOOLMARM by Tina Susedik

THE SCHOOLMARM has us back in the Deadwood, Dakota Territory in 1879. We are privy to Suzanna and Julia’s first impressions of the town and the people in it. Suzanna is to be the new schoolmarm and gets doused with mud upon her arrival. Things go from bad to worse soon after. There was a nice flow to the story but no closure. I was happy to see the author will continue the story of Suzanna and King, her nemesis in this story, in Julia’s book, THE BALCONY GIRL, coming out in the fall of 2019.

LOVE ACROSS TIME by Sylvia McDaniel

LOVE ACROSS TIME has us in the present and the past, since this is a time travel story. Although not usually a genre I enjoy reading, this one had me intrigued. There was a lot of action built into a few pages that left me wanting more. The story had a nice flow to it, and I liked the characters of Sadie and her grandmother. There was some closure but I wish the story had gone just a bit further.

CASH’S CLAIM takes place in the Deadwood, Dakota Territory in 1877. The story has Jess going to the badlands, the disreputable part of town, in order to be able to survive the winter on her ranch. But Swearengen, who we’ve met many times before, seems to run the badlands, and that’s not good for anyone. Good thing she has a good man to look out for her. Fast-paced and with a nice flow, CASH’S CLAIM has some surprises that make for a fun story.

AFTER THE FALL by Terri Osburn

AFTER THE FALL has us back in the present and where else but Deadwood? Colton is a bull rider and seriously injured. His sister, Aspyn, rushes to his side when he’s admitted to the hospital, where she’s reunited with his best friend and her former boyfriend, Tucker. Things haven’t improved since she and Tucker broke up years before, which is proven as they continue to argue. The story has a good flow and an easy pace. The situations seemed real along with the injuries sustained.