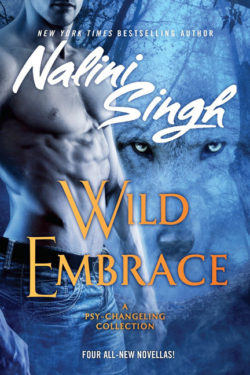 Nalini Singh brings her readers a real treat with WILD EMBRACE, a collection of four novellas from her Psy-Changeling series. This is a must for any Psy-Changeling fans, though new readers would do best to start from the beginning of this series (SLAVE TO SENSATION). The world-building is so lush, you don’t want to miss out on this incredible series filled with characters you can’t help but love.

In ECHO OF SILENCE, human Tazia Nerif and Tk Psy Stefan grow close after years of working in Alaris, a deep-sea station. Stefan isn’t as emotionless and unfeeling as he seems, as Tazia learns firsthand working alongside him, topside, during a volunteer emergency rescue. An earthquake has torn apart a small village, and Stefan lends his considerable skills to save lives. Tazia,struggling with a rift in her family, accompanies him, and as they work together, their fascination for each other blossoms into soul-deep love. This was my favorite story in the collection. Singh really knows how to get deep into the healing power of love, the concept of isolation, and what being alone while surrounded my others really means. Outstanding, uplifting story.

DORIAN shows Dorian’s progression from latent leopard changeling into the fierce shifting cat and family man we’ve met in previous books. Seeing his frustration as a cub, then teenager, to meeting his mate and experiencing his shift for the first time, felt like a gift in itself. A terrific addition to the series. (For Dorian’s story, check out HOSTAGE TO PLEASURE.)

I found PARTNERS IN PERSUASION to be a close second favorite. The idea of a female dominant changeling courting a submissive male changeling fascinated me. Desiree, a strong, dominant leopard, is taken with the handsome submissive wolf, Felix. But he’s been emotionally hurt before, by a dominant very like Desiree. It will take both patience and love to melt Felix’s resistance. Singh is terrific in crafting a male character who’s strong yet submissive and never feels less than he should be. Desiree exhibits strength and care, the equal to any male dominant yet strongly female. Such wonderful characters. This love match really works, on all levels.

And finally, with FLIRTATION OF FATE, we see Kenji and Garnet, a couple who should be together but hasn’t been since Kenji broke Garnet’s heart years ago. The wolf changelings come together to investigate a murder in the pack. Though Garnet is in charge of the investigation, Kenji’s position ensures he’s on hand to help. When secrets are revealed, will their love endure, or crumble under misunderstandings? I liked this story, even as I guessed Kenji’s secret at the beginning. Still, this tale of love lost and regained had me grinning from ear to ear when I finished.