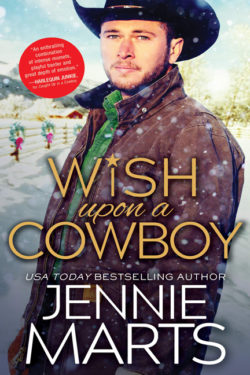 I love all things cowboy, and throwing in Christmas never hurts. WISH UPON A COWBOY, the fourth book in the COWBOYS OF CREEDENCE series, did not disappoint on either.  I’ve only read the first book in the series, CAUGHT UP IN A COWBOY, but dove right in and was brought up to speed with just a few unknowns. I have added the other two books in the series to my TBR pile and hope there will be more books in this series since there seem to be more stories to tell.

Harper is down on her luck given a poor choice she made. She’s lost her son, at least temporarily, to his paternal grandmother. When she makes her way from Kansas, where she lives, to Colorado, where her son Floyd is currently living, things take a positive turn. Her path seems to cross with helpful people. When she’s brought to Logan’s family ranch to apply for the job of housekeeper, things seem too good to be true. She’s a hard worker, and his house is totally in disarray, not to mention the chemistry between them.

We get to know the characters a little bit at a time. Harper had a rough time growing up and agonizes over losing her son with no idea how to get him back due to her low self-esteem. She and Logan open up to each other somewhat, but Harper holds back.

There are many stories going on at the same time, which are woven smoothly together.  The ranch animals add another level to the story. Throw in Christmas, decorating, good cooking, and some heavy duty flirting and the story just gets better. Unfortunately, there are also lots of secrets, feelings of unworthiness, loneliness, and fear which does put a damper on things.

WISH UPON A COWBOY is filled with failure and triumph and ultimately love. The unexpected support of people living in a small town is touching. And the author crafts a beautiful happily ever after.

Ms. Marts is fairly new to me. I plan to give many more of her books a read since she writes in a style I like with lots of family, friends, romance, and love.