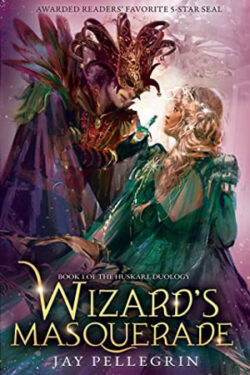 Leyna Saunders dreams of becoming a wizard huskarl, a protector of the royal family. She almost loses her chance after a harrowing incident leaves her injured. A mysterious wizard gives Leyna an opportunity to achieve her career goals. Her first task as a huskarl is to escort an annoying jester and his troupe to the royal castle. The man exasperates Leyna at every turn. She soon finds herself deeply entrenched in a dangerous game of intrigue, secrets, and lies. Can Leyna find the true perpetrator behind the king’s death? Is the Jester an ally? Or is he, her foe?

Jester is just one of the many personas he adopts to hide being the king’s spy. He cannot help but taunt the moralistic huskarl escorting him to the castle. There is something about the young woman that fascinates him. News of the king and his court’s demise forces him to include Leyna into his dangerous world. She could prove instrumental in ferreting out the perpetrators behind the massacre and ensuring the crown prince’s safety. Can Jester entrust Leyna with the truth of his identity and his job? Or will her strict morals doom them?

Leyna really annoyed me at the start of the book. She came off as too sanctimonious, self-absorbed, and ambitious for my tastes. However, my opinion of Leyna started to change as the story progressed. Her moments of vulnerability and doubts helped endear her to me. I like how Leyna’s mindset changes for the good. She learns the valuable lesson that the things she wants are always best for her or what she needs. Leyna also realizes that everything is not laid out in black and white, but in shades of gray. This change allows her to adapt to situations and her surroundings.

Jester won my heart instantly! He is such an entertaining and delightful hero. I never thought I would enjoy his character type the way I did. It is a nice change of pace than the usual brooding, alpha warrior-types in the fantasy genre. I absolutely adore Jester’s banter and interaction with Leyna. It helped lighten the serious mood in certain places of the storyline. His ne’er-do-well persona helped balance out Leyna’s strait-laced attitude.  What I love the most about Jester is how he secretly admired Leyna for her single-minded drive. He may have teased her mercilessly about it, but he respected that aspect of her nature.

WIZARD’S MASQUERADE is the first book in Jay Pellegrin’s fantasy romance series, THE HUSKARL DUOLOGY. I believe this is the author’s debut novel. I admit the cover is what first drew me to the book, then the synopsis. The concept of a jester being the hero intrigued me. And it did not disappoint! I found myself quickly and deeply immersed in the plot and characters. The author does a superb job setting up the intricacies of her world, especially their magic system.

WIZARD’S MASQUERADE is a must read for high fantasy readers. It has a little bit of everything from wizards to demons, castles and political intrigue all wrapped in a spellbinding romantical tale. I cannot wait for the next installment!