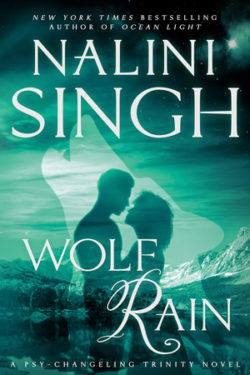 In Nalini Singh’s WOLF RAIN, the third in her Psy-Changeling Trinity branch-off series from the Psy-Changeling series that began in all, we’re back with Changelings and Psy, and the tension, romance, and danger shape a fantastic return to captivating paranormal romance.

A wolf Changeling discovers a captive Psy woman on Changeling territory, and so begins an emotionally driven story about the power to survive and live, and the terror of believing the worst of oneself.

Memory is a Psy woman who must learn who she is and what she can do with a power that’s been oppressive for most of her life. But with wolf Changeling Alexei’s help, she’ll find herself. Her interaction with the empaths is wonderful and enlightening, bringing past characters back while shaping this future world.

Alexei has known grief, losing those close to him in a terrible manner. Through Memory, he begins to see life in a new way. And as he and she grow closer, watching him break out of his shell is so incredibly emotional. Which is not to say Memory’s own awakening doesn’t evoke tears. (Don’t get me started on her cat!)