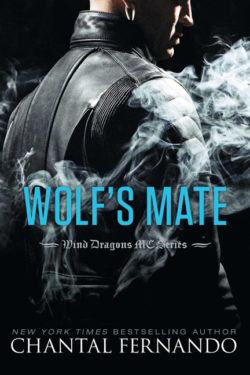 Joining the Wind Dragon MC gave Vinnie, known by his road name as Wolf, the family he always wanted. There isn’t anything Vinnie wouldn’t do for his brothers or his club. When his marker is called in by Talon, president of the Wild Man MC, Vinny will have to babysit Talon’s spoiled cousin Shayla. This assignment should be easy, even if dealing with a spoiled princess is annoying.

Shayla is not unaware of the MC lifestyle, as her cousin is president of one. Even though she’s never been around them, because Talon won’t let her, she’s not afraid of them. But she never expected someone like Vinnie to become her new keeper. Nor did she expect the feelings she starts to have for him. When the danger gets too close, Vinnie brings Shay into the arms of the Wind Dragon MC.

Vinnie is willing to do what is necessary to keep Shay safe, even if it means that his brothers become involved. Shay is now Vinnie’s, and he will destroy anyone who threatens to take her from him. Will Vinnie be able to protect Shay from those trying to hurt her? Will Shay be able to show the strength necessary to become WOLF’S MATE?

WOLF’S MATE is the fifth installment in the Wind Dragon MC series, and I absolutely adored it. Vinnie has been one of my favorite characters since he was introduced, and I was happy to see that he got his own HEA story with a strong and snarky heroine. The dialogue between the two characters is at times hilarious and sexy as hell. Readers will like learning more about these two characters, as well as getting a glimpse of the other characters from this amazing series. This is a wonderful story that will captivate readers of not only MC novels, but pure romance readers as well.