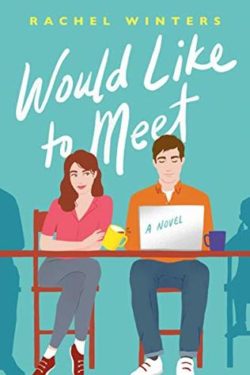 WOULD LIKE TO MEET is a lighthearted romance story filled with daffy, dating disasters. The book stars Evie Summers who believes in love at first sight. Well not really, but she is trying to convince herself of this, along with an absurdly handsome, egotistical screenwriter named Ezra Chester, that falling in love during chance encounters, just like in the movies, really exists. Is she nuts?

Bah, convincing Ezra is a piece of cake, but first she must humiliate herself by replicating dating set-ups designed for chance encounters with complete strangers. Will it work?

Evie’s job as an assistant with a screenwriting agency is on the line. Her rascal boss informs her that the agency is on shaky ground if they don’t get Ezra to turn in the rom-com script he promised them. Right, okay then. Evie hatches a plan, that she will text her dating encounters to spur him to write the blasted script, since he is stumped and in return he sends in what he writes.

Truthfully, Evie is jaded on love, after her soul-sucking boyfriend dumped her, the rat! Evie’s best friends give her much needed pep talks via texts, to ratchet up her confidence, that she can do it. Plus, her new friend, Ben, and his daughter, Annette, gamely encourage her too, but caution her with words of wisdom. Will Evie bravely go where no woman has gone before in the dating world? Will she ever find her forever love?

WOULD LIKE TO MEET is a top notch romance comedy brimming with crazy humor, a dazzling, dishy plot, with oodles of drama. The author superbly brings to life madcap moments reminiscent of romantic comedies and the I Love Lucy show. If something can go wrong, it will in Evie’s life. Evie is one determined dame. She gives her job one hundred percent and then some! Ezra didn’t expect Evie to deliver and put herself into all these embarrassing situations. Evie tries her hardest to meet that perfect someone but nothing is happening. What can she do? Does she ever meet that perfect man or is it just an illusion? The author expertly pens a thoroughly entertaining story, because there is never a dull moment. WOULD LIKE TO MEET is just like a fine champagne. Very bubbly and blushingly brilliant!