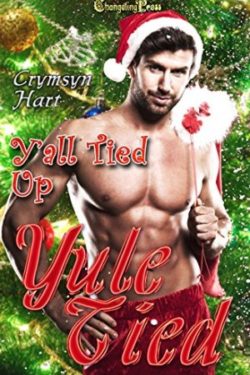 Aniston’s impression of the Jolly Fat Man, aka Santa, has been blown. Rather than a rotund man delivering gifts he encounters a sinister being.  The next thing he knows, he’s been kidnapped and finds himself in an alternate reality where his kidnapper is a giant, gingerbread men are cannibals, nutcrackers and tin soldiers roam Krampus’s home guarding his sack until he ventures out again for his next victim when the special bell rings.  The one upside to the entire situation is meeting Clive, another man who’s also trapped in this odd reality.

Once Clive rescues Aniston from his horrifying fate, they spend days evading the sinister gingerbread men who are released each night to ensure none of the people he’s brought back can escape. However, Aniston and Clive manage to hide in a mouse hole – and while they’re there they grow closer and discover how sexually compatible they are while they wait for their opportunity to escape.

Crymsyn Hart’s Y’ALL TIED UP is a whimsical tale that’s basically an adult version of Elf on a Shelf. You know, if you don’t behave this is what can happen to you kind of idea.   Aniston seems like a good guy so it’s hard to understand what he could have possibly done to end up in Krampus’s clutches, but that’s part of what makes it fun to imagine how Aniston and Clive join forces to escape together.   At only 37 pages Y’ALL TIED UP is a short read chock full of fascinating horror themed Christmas items.  Throw in Addison and Clive’s romance and their determination to escape Krampus’s home and this is a story that will keep you enthralled to the very end.