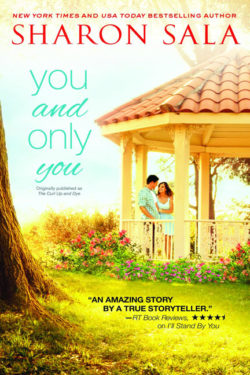 YOU AND ONLY YOU by Sharon Sala is set in the small town of Blessings, Georgia. If you love small towns, Blessings has it all. It’s filled with a whole cast of quirky characters starting with the hub of the town—the Curl Up and Dye beauty salon owned by Ruby Dye.

LilyAnn Bronte works for the local pharmacy. She has spent the last eleven years grieving for her high school sweetheart killed in Iraq. During this time, she has stopped living. She doesn’t date and doesn’t connect with the community. She has withdrawn from everything until a new man, T.J. Lachlan, comes to town. Suddenly, LilyAnn takes a hard look at herself and doesn’t like what she sees.

Mike Dalton owns the local gym and lives next door to LilyAnn. He’s been in love with her since they were kids, but he’s about to call it quits when he thinks she’s fallen for someone else. Mike’s big problem is that he’s never told her how he feels.

LilyAnn has always seen Mike as a friend, but when he’s seriously injured, she drives him to the hospital and stays by his side until he comes out of surgery. She is grief-stricken at the idea of losing him but doesn’t recognize the feelings as love.

Lachlan becomes obsessed with LilyAnn when she refuses to date him and begins stalking her. He eventually breaks into her house and attacks her, but she fights him off. When he pulls a knife on her, Mike hears her cries for help and comes to the rescue.

With the help of the girls at the Curl Up and Dye, they nudge LilyAnn and Mike together and they find their happily ever after. Great characters and a really sweet romance.