Though Elizabeth McKenna’s love of books reaches back to her childhood, she had never read romance novels until one Christmas when her sister gave her the latest bestseller by Nora Roberts. She was hooked from page one (actually, she admits it was the first love scene).

She had always wanted to write fiction, so she combined her love of history, romance and a happy ending to write Cera’s Place and Venice in the Moonlight. Her short story, The Gypsy Casts a Spell, is available for free on her website http://elizabethmckenna.com/. She hopes you will enjoy her first contemporary romance novel, First Crush Last Love, as much as others have enjoyed her historical romances.

Elizabeth lives in Wisconsin with her understanding husband, two beautiful daughters, and a sassy Labrador. When she isn’t writing, working, or being a mom, she’s sleeping.

You can find Elizabeth here:

What reviewers have to say about Elizabeth’s books

Taneisha’s Book Blog (10/18/17) “Grab some tissues and dig in. It is a warm and heartfelt story worth reading over and over again.”

Working Mommy Journal – 5 stars (10/17/17) “This is a truly beautiful story of hope, love and a second chance at first love again.”

Amie’s Book Review Blog – 4 stars (10/20/17) “This feel good, second chance romance will put a smile on the face of even the most stoic, jaded reader.”

Goodreads – 5 stars (12/2/17) “The story was captivating and drew me in from the start. I loved the character development that both Jessie and Lee went through as they grew up and discovered what they wanted from life. The struggles they went through were extremely well written and kept me, as a reader, invested in their story. The tension caused by the undertones of violence and abuse provided an edge to counteract the sweet romantic elements.” 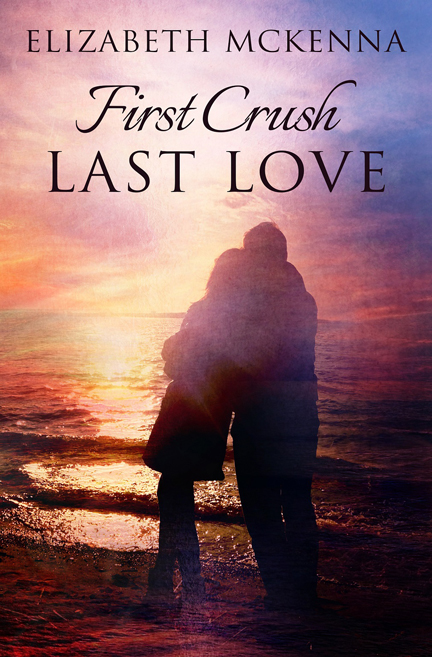 Remember your first crush? How your heart raced and your cheeks flushed whenever you saw him? Jessie Baxter does, and it’s happening again. Ten years ago, despite her best efforts, Lee Archer wanted to be just friends. Now, he wants more, but Jessie’s still recovering from a psycho ex-husband. Can she learn to trust again and make her first crush into her last love?

Elizabeth McKenna’s latest novel will have you remembering the angst of high school, the grief of a failed relationship, and the happiness of true love.

Paperback: $8.99 (US) at CreateSpace and Amazon

Jessie flipped on the foyer light and her nerves relaxed until she saw the rug at the bottom of the stairs. It was askew. Her eyes darted over the space in front of her. Everything else was in its proper place. Besides the inability to pick faithful husbands, she and her mother shared the rarely appreciated trait of compulsive neatness.

She thought back to when she had left the house earlier. Maybe in her haste to meet Sarah, her foot had slid the rug out of place as she came down the stairs. But she would have straightened it. Unless she didn’t notice . . . but she would have noticed . . . because that’s how she was.

She inched into the kitchen and picked up the phone. She’d call the police and ask them to search the house. Because of a cockeyed rug? Even in her paranoid state, she knew it would sound crazy. Their first question would be, “How much did you have to drink tonight, Ms. Baxter?”

She shook her head. For all the bravado she showed in front of Lee, here she was acting like a scared twelve-year-old, alone for the first time while her parents were on a date night. Her mom had offered to cancel her trip to London when Jessie told her the date of the class reunion, but Jessie had insisted she go. Since retirement, these trips had become her mom’s main source of entertainment.

She rummaged in her purse until her fingers found her pepper spray. With the canister at arm’s length, she circled each room on the first floor, testing the locks on the windows. Everything seemed in order. She let out a breath and grasped the banister leading upstairs with her free hand while her foot straightened the rug.

The steps to the second floor creaked under Jessie’s weight. She shuddered at the eerie feeling the empty house gave off. Still clutching the pepper spray, she checked the windows upstairs before collapsing on the bed in her childhood room. The house was too big for one person. She didn’t know how her mom stood it. Maybe tomorrow she’d move to Sarah’s. They could have a slumber party like old times.

Old times. Lee Archer. Wow. Her smile turned into a yawn. Something itched at the back of her mind, but after seven hours in a car and a few more in the bars, she gave into heavy eyelids and fell into an uneasy sleep.

At three in the morning, her eyes flew open and she clutched the comforter to her chin.

Underwear. A pair of lacy, black underwear hung from the top rail of the desk’s chair. No way in hell had she done that.